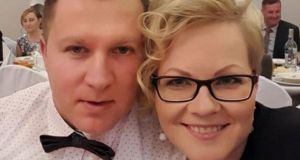 Mikolaj Wilk, who was killed after a gang of up to four men broke into his Cork home and assaulted him and his wife, Elzbieta. Photograph: Provision 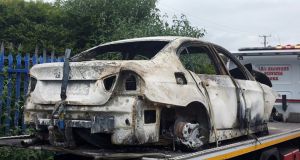 The burned-out car from which gardaí recovered a firearm in Waterfall, Co Cork. Photograph: Daragh McSweeney/Provision

Gardaí investigating the murder of a Polish father of two in a machete attack in Ballincollig, Co Cork, last Sunday morning have indicated that he died of multiple injuries including stab wounds.

The postmortem examination on Mikolaj Wilk (35) was carried out at Cork University Hospital (CUH) on Monday by Deputy State Pathologist Dr Margaret Bolster. No specific details of the injuries have been made public.

Gardaí have also recovered a firearm from the suspected getaway vehicle. It was removed from a BMW found burned out at Inniskenny, Waterfall, hours after Mr Wilk was killed.

Mr Wilk (35) was attacked by up to four men at his bungalow at the Bridge House, Maglin, Ballincollig in the early hours of Sunday morning. He died at Cork University Hospital at 5.30am on Sunday.

His wife, Elzbieta, suffered injuries to her head, face and hands.

Mr and Mrs Wilk’s children, who are aged four and five, were also present at the time of the attack. They were unharmed.

A second woman in her 30s who was renting a room in the house escaped through a window of the bungalow.

Gardaí have yet to establish a motive for the attack.

Mr Wilk, who ran a well-established gardening business in the Ballincollig area. was not known to gardaí. Supt Colm O’Sullivan renewed his appeal for information yesterday. “We are continuing to appeal to anyone with information or to anyone who may have witnessed this incident. Any drivers who may have dash-cam footage and travelled in the Maglin, Ballincollig, Ballinora and Waterfall areas between 2am and 5am on June 10th.

“If anyone noticed any suspicious or unusual activities in these areas in the days leading up to the incident, contact Gurranebraher Garda station on 021-4946200, the Garda Confidential Line 1800-666 111 or any Garda station.”

The Wilk’s children are being cared for by another family.

Aga Deryng, a friend of the family, said she suffered damage to her tendons and has temporarily lost feeling in three of her fingers. Ms Deryng said she also sustained head and facial injuries in the “brutal attack”.

Ms Deryng said her friend was heartbroken because Mikolaj was her husband and her best friend. “They have lived here approximately 12 years or so. They had a business here. Their children were going to an Irish school. This was their home.”

“We have no idea of what happened. Nobody knows the answers. They are a wonderful family.”

She said Mr Wilk was a “generous and helpful man” with a “wonderful heart”.

The Polish chaplain in Cork, Fr Piotr Galus, plans to hold a special Mass in memory of Mr Wilk tomorrow.

A second Mass will be held in Ballincollig at the weekend.