Dead man, whose wife is being treated in hospital, has been named as Mikolaj Wilk (35) 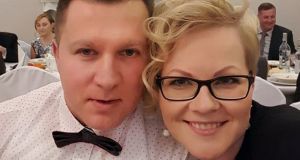 Mikolaj Wilk, who was killed after a gang of up to four men broke into his Cork home and assaulted him, and his wife Elzbieta, who is being treated in hospital after being injured in the incident. Photograph: Provision

A Polish man has died and his wife has been injured after a gang of up to four men broke into their Cork home and assaulted them in the early hours of Sunday morning.

Gardaí have said there is no known motive for the fatal stabbing of Mikolaj Wilk (35) and the assault on his wife, Elzbieta, who is also in her 30s.

A second women in her 30s and the couple’s children, all of whom were in the house, were not harmed.

The men entered the house armed with weapons including machetes. The husband and wife lived in a bungalow at Bridge House, Maglin Bridge, Ballincollig, Co Cork with their two children who are under the age of six.

Mr Wilk, whom friends called Nik, was known locally for running a gardening business and had lived in Ireland for at least five years.

Speaking at a press conference outside the house, Supt Colm O’Sullivan said gardaí responded to the incident at 3.17am on Sunday and were on the scene in less than five minutes.

The assailants had fled the area in a car. A silver BMW was later found burnt out at Inniskenny in Waterfall, Co Cork. It is understood a gun was recovered from the car.

Mr Wilk was taken to Cork University Hospital where he died shortly after 5am. A postmortem will take place on Monday.

His wife is being treated in hospital for non life-threatening injuries.

The scene of the attack has been forensically examined and a family liaison officer has been appointed. House-to-house inquiries are ongoing as are CCTV checks.

Supt O’Sullivan said it was tragic to see a man leave a wife, family and friends behind in such circumstances.

“Our thoughts are with his family and friends at this time. We are appealing for any information the public may have. This morning people would have been returning from a night out or going to or from work. If you noticed anything in the Maglin, Ballincollig, Ballinora or Waterfall areas, please contact An Garda Síochána.

Supt O’Sullivan said it was a busy road and junction and someone must have witnessed unusual activity.

“They must have witnessed something. It may appear to someone as quite insignificant but to us it could be significant.”

The bungalow was preserved for a technical examination and two vehicles were also removed to be examined by gardaí.

Local Fianna Fáil councillor Daithí Ó’Donnabhain said the area was in shock over the viciousness of the attack.

“First of all the family were in the house. No doubt things were overheard and witnessed by young children. My thoughts would have to go to the family first and foremost. I can’t imagine what they are going through at this time.”

He added that the incident had shocked the community.

“There is no history of serious or violent crime in the town. This is very much unheard of in terms of any type of incident of this nature. It is a good place to live. I think this echoes reports that would have been in the media in terms of rural crime. People will have a fear of living on their own or in rural locations as to who is around at night.”

Gardaí are appealing for witnesses or anyone with information to contact them at Gurranabraher on 021 4946200, the Garda Confidential Line on 1800 666 111 or any Garda station.