Man who hands out Gospel tracts in Coleraine appears in court 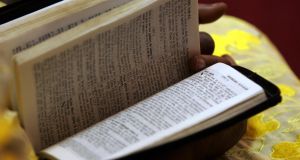 It is understood the defendant was handing out Gospel tracts to passers-by on the date in question.

A man who hands out Gospel tracts in Co Derry has appeared in court charged with disorderly behaviour and resisting police.

David Campbell McConnell (60), of Liswatty Road, Coleraine, is accused of committing the offences on March 31st this year at Park Street, Coleraine.

The case at had been adjourned until Monday for Coleraine District Court to get an update on a “medical report”.

A defence lawyer said the report had now been served on prosecutors.

The defendant, who has pleaded not guilty entered the courtroom and, standing outside the dock, asked the judge if he could make a “speech”.

The defendant then told District Judge Liam McNally: “I honour you and I honour my saviour, the Lord”.

The judge replied: “Thank you very much Mr McConnell”.

After being informed that the case was being adjourned the defendant said “God Bless” to the judge and shook hands with a member of the public in the public gallery. The case was adjourned until later in the month.

The alleged circumstances of the incident in March have yet to be outlined to the court but it is understood the defendant was handing out Gospel tracts to passers-by on the date in question.

At a previous hearing the defendant had told Judge McNally that although he “honoured him” as a judge “on earth”, the Lord was his “saviour”.