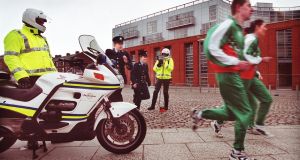 Emails reveal Joe Ainsworth, head of the Garda fleet, said there was no money for a Traffic Corps revamp and suggested “freeing up” funds by dropping the purchase of motorbikes. Photograph: Bryan O’Brien

A planned order for new Garda motorcycles has been ditched by management looking for ways of “freeing up” money to pay for a rebrand of the Traffic Corps in the wake of the breath-testing scandal.

Documents released under Freedom of Information show the cost of giving patrol cars and bikes a facelift with the unit’s new name – Roads Policing – will run into at least tens of thousands of euro.

Emails reveal Joe Ainsworth, head of the Garda fleet, privately conceded there was no money for the revamp and suggested “freeing up” funds by dropping the budgeted purchase of an undisclosed number of motorbikes for the unit this year.

Minister for Justice Charlie Flanagan has confirmed the Garda will buy no new motorbikes this year, despite the planned tender. None were bought last year either and the fleet has already dropped from 104 to 92.

The Garda Representative Association (GRA), which represents grassroots officers, has criticised the prioritisation of “window dressing” over “fit for purpose” vehicles to help them apprehend criminals.

“The GRA believes that the rebranding exercise has had more to with optics than real roads policing progress,” said spokesman John O’Keeffe. “Changing the shop window from ‘Traffic Corp’ to ‘Roads Policing’ is just that – window dressing.”

The GRA recently complained to Garda management that “money would have been far better spent on areas such as equipment, Garda mental wellbeing and training – to name but three areas”, said Mr O’Keeffe.

“While consistent branding will always be important for the organisation, of far greater import we would say, is the apprehension of such criminals with vehicles and equipment fit for purpose – not new liveries,” he added.

Sgt Cormac Moylan, of the Association of Garda Sergeants and Inspectors, said he will be raising the matter at the association’s executive meeting in Dublin this week. “Motorcycles are an essential tool of roads policing, especially in urban centres,” he said. “They are worth their weight in gold.”

The overhaul of the Garda Traffic Corps was ordered last year after the breath test controversy, in which gardaí were found to have falsified the number of tests by up to 1.9 million over eight years.

In January this year, Mark Murphy of Garda National Roads Policing Bureau emailed Noel Candon of graphic design company Esmark Finch to arrange the rebranding of all Traffic Corps vehicles. The fleet was made up of 109 cars, 93 motorcycles, two vans and one multi-purpose vehicle.

Largely redacted emails show fleet boss Mr Ainsworth was told by Michael Culhane, the Garda’s director of finance, that there was no money for the work.

“I have spoken to Michael Culhane who has advised me that no funding has been agreed for this project,” he wrote. “Fleet management have a budget but it is fully committed on direction of deputy operations. So I also have no budget for this either.”

Mr Ainsworth added: “An option would be to drop the purchase of the planned [redacted number] motorcycles for 2018 freeing up some [redacted cost].”

In response to a parliamentary question, Mr Flanagan last week said he understood “from the Garda authorities that it is not planned to purchase additional motorcycles in 2018”.

Garda Headquarters declined to disclose the overall cost of rebranding. It said the bill up to February 1st was €29,806, but the process only started in mid-January and is ongoing.

Supt Sharon Kennedy of the Garda FoI unit refused to disclose further financial details, including overall quotes, on the basis that it could prejudice “future financial endeavours”.