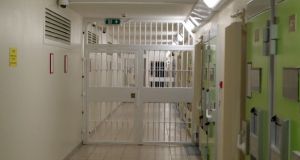 Prison management is confident it has contained the outbreak at the Midlands Prison. Photograph: Collins Dublin

More than 40 prison officers and staff from the Midlands Prison are self-isolating amid a Covid-19 outbreak at the facility.

About 30 officers are isolating having been in close contact with a confirmed Covid-19 case or having displayed symptoms themselves, according to informed sources. Another 11 staff have been diagnosed with the virus. This includes five officers and one teacher who were diagnosed on Monday.

There has been no increase in confirmed cases among inmates since the outbreak was first detected on Friday. The number of infected prisoners remains at five, all of whom are housed in the A2 landing which holds serious offenders.

Prison management is confident it has contained the outbreak among the prison population but there is increasing concern about its spread among staff.

An Irish Prison Service (IPS) spokesman said the running of the prison has not been impacted by staff shortages. The Midlands holds 810 prisoners and has about 500 staff.

Despite reassurances from prison management, prisoners and staff are understood to be very worried about contracting the disease. The Prison Officers Association (POA) has also criticised what it says is a rush towards easing Covid-19 restrictions within the country’s 13 facilities.

The IPS said infection control remains a priority but that it is also “mindful of the need to find a balanced prison regime that provides safe controls against the virus but also allows for the provision of important regimes and services to prisoners.

“Divisional unlock has operated for some time across the prison estate and while the confirmation of an outbreak in the Midlands prison is a cause for concern, the fact that the outbreak was confined to a small number of prisoners from a single division clearly shows that our procedures and regimes have been effective and the infection has been contained,” the spokesman said.

It is understood the Inspector of Prisons has also called for inmates to be given more out of cell time amid concerns about their mental health.

At least some of the outbreak among the Midlands staff is thought to relate to a prisoner disciplinary meeting last week attended by three staff members and a prisoner.

Those present were forced to self-isolate after an attendee began showing symptoms the next day.

All 810 prisoners in the Midlands have already been tested and are currently being retested. Movement within the prison has also been restricted.

Schools and training courses have been suspended but teachers are preparing educational packs which prisoner can use in their cells.

It is the first time Covid-19 has been transmitted among the prison population since the start of the pandemic. There have been five other infections in other facilities but officials are confident those inmates were infected on their admission to prison.