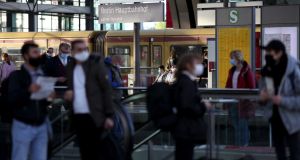 A Roscommon businessman who served as the unwitting middleman for an international €15 million face mask scam is unlikely to face criminal charges.

The man, who is in his 40s, was interviewed last April as part of an investigation into attempts to defraud German health authorities who were desperate to acquire face masks to deal with the Covid-19 pandemic.

The businessman put one of the buyers in touch with a face mask provider which later turned out to be fake. He also allowed his account to be used for the transfer of a €1.5 million down payment.

After a lengthy investigation, detectives from the Garda National Economic Crime Unit now believe the man’s story that he honestly thought he was taking part in a legitimate business deal.

Although the German buyers transferred €1.5 million into the man’s account for the masks, gardaí believe the scammers planned to retrieve this money from him at a later date.

A file will be prepared for the Director of Public Prosecutions (DPP) but the Roscommon man is highly unlikely to face charges, according to a source.

The fraud began amid a massive global demand for face masks which forced many countries to go to the open market to source supplies.

The German authorities went to purchase 10 million masks, worth €14.7 million, online from a legitimate company in Spain. However, scammers had cloned the company’s website. The scammers told the Germans they could not fulfil the order but could refer them to a trusted seller in Ireland which turned out to be the Roscommon businessman.

The Roscommon man then referred them to the website of a company in the Netherlands, which later turned out to have also been cloned from that of a legitimate company.

Someone claiming to be from the Dutch company agreed to initially supply 1.5 million masks for an upfront payment of €1.5 million. This sum was then transferred to the man’s bank account.

The German authorities were then told the money never arrived and that another €880,000 was required to secure the purchase. This was paid straight into a Dutch bank account before the scam was uncovered.

The €1.5 million in the Irish account has now been returned to Germany.

The Roscommon businessman told both the Garda and Dutch police that he believed the fake company at the centre of the fraud was legitimate.

He told Dutch police he had interacted with the company in July 2019 and had received some free samples of face masks from them.

On March 28th, 2020, after it became apparent the company was a sham, he went to Burgwallen Police station in Amsterdam and spoke to detectives.

The investigation into the scam is ongoing. It spans at least five countries and is being coordinated by Interpol.

In July, two men were convicted in the Netherlands of forgery and money laundering in relation to the fraud. They were jailed for two years.

The arrest of these men led to the identification of a Nigerian man who investigators believed had orchestrated the entire scheme. According to Interpol, this “mastermind” was arrested in Lagos, Nigeria in September following a mutual assistance request from German prosecutors.