Complaints about excessive fees and delays among 1,146 complaints made to Law Society last year 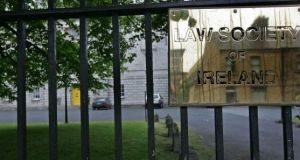 The likelihood that people will make a complaint against a solicitor is half what it was ten years ago, the Law Society said. Photograph: Eric Luke

Complaints against solicitors have fallen to less than half the level of 2011, a reduction the Law Society puts down in part to the drop in property transactions since boom times.

Figures published by the society show there were 1,146 complaints made last year as compared to 2,622 six years earlier.

The Law Society says the figures represent an “historic low”. Just 6 per cent of solicitors were subject to complaints in 2017, it said.

“The likelihood that complainants will make a complaint against a solicitor is half of what it was ten years ago,” the Law Society said.

There are three categories of grievance - misconduct, excessive fees and inadequate service.

Explaining the significant fall off in accusations, the Law Society said it was partly due to the decline in economic activity since the boom, specifically property transactions; improved education in the profession; and an increased focus on risk management procedures.

It also counts competitive pressures with clients more likely to switch service provider in cases of dissatisfaction, and an improved regulatory system run by the society itself.

The proportion of solicitors against whom an admissible complaint has been made is now at a 20 year low, standing at 6.2 per cent. It was at 14.7 per cent in 1998.

Excessive fees accounted for 7 per cent of all complaints in the past ten years, and 8 per cent in 2017.

“This contrasts with the popular (but erroneous) belief that excessive fees are a major source of complaint.”

Inadequate services accounted for 31 per cent of all complaints last year, which included delays and failure to communicate.