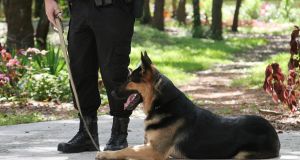 The Department of Justice spent nearly €1 million on consultancy reports in recent years, including a “value for money” review of the prison service’s dog unit and a nutritionist’s examination of menus for inmates.

Other commissions include the drawing up of a “cleaning manual” for jails , a report into the feasibility of a prison laundry at Mountjoy and a “facilitators report” by the Communications Clinic on a one-day Irish sign language workshop.

Documents released under Freedom of Information also show external consultants were paid tens of thousands of euro to look into the circumstances of seven deaths in custody. None of the reports have been published.

There was another consultant’s report into security at State visits after Queen Elizabeth’s trip to Ireland in 2011. Capita Consulting was paid €6,598 for the review.

The unpublished “value for money” review of the Irish Prison Service (IPS) canine unit, by GBS International, cost €14,441; the prison menu review by Calista Nutrition cost €2,735; and the development of a “Cleaning Manual for IPS” by Cleanpass was €6,000.

Archie Kerr charged €973 for a “Feasibility Study of Laundry Service in Mountjoy”; and the “Facilitators report” on the Irish sign language class, by the Communications Clinic, cost €1,374.

There have been numerous consultancies commissioned to examine IT systems and security at the department and the Irish Prison Service.

Mazars was paid €18,081 last year for a “risk assessment” of prison technology. The same firm was also paid €48,708 last year for a review of the department’s organisational structure.

Ernst & Young charged €76,568 for a “stock take” of the department’s ongoing reforms, ordered after the damning Toland Report in 2014. The Toland review group was asked to examine the performance, administration and management of the department and to make recommendations to the Minister. The group interviewed all members of the department’s senior management team along with other relevant parties.

One of the costliest commissions has been a five-year study of how gardaí interview suspects.

The review, between 2011 and 2015, was ordered in the wake of revelations in the Morris tribunal about alleged Garda wrongdoing.

Prof Gísli Gudjonsson, a renowned forensic psychologist whose expert testimony on false confessions helped free the Birmingham Six and the Guildford Four, and Dr John Pearse of Forensic Navigation Services, UK, were paid €59,729 for the review, which remains unpublished.

Dr Ide Delargy, an expert on substance misuse, and Hugh Kane, former head of the Mental Health Commission, were commissioned in 2011 for six reports into deaths in custody. They were paid €11,234 and €10,714 respectively.

Another investigation into a death in custody was carried out the same year by Dr JJ Kennedy at a cost of €1,634.

All of the reports are “not for publication”, according to the department.

In 2013, Sue Corbett and Jacinta Kitt were paid €10,500 to examine “staff perceptions” about dignity at work in Irish Prisons.

A review of the Irish Prison Service fleet by the Automobile Association cost €10,000 in 2016.