Wicklow man tried to strangle two children, leaving them when he thought they had died 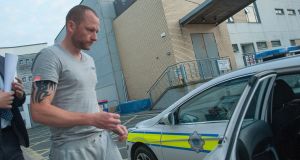 A file image of Stephen Harnett who has pleaded guilty to the attempted murder of four children. File photograph: Dave Meehan/The Irish Times.

A man in his 30s has pleaded guilty to the attempted murder of four children.

The court heard that the Wicklow man attempted to strangle two of the children and left them when he thought they were dead.

He then moved on to the other two who fought back and escaped through a window. One of the children was unconscious when paramedics arrived and was taken to hospital by air ambulance.

Two others were purple in the face and one had bulging eyes.

Stephen Harnett (37) of Kilpoole Upper, Blainroe, Wicklow replied, “guilty” in relation to each charge and was remanded in custody following a brief hearing in front of Mr Justice Michael White at the Central Criminal Court.

The assaults on the children took place on June 3rd, 2016. Speaking on Harnett’s behalf, Patrick Gageby SC said his client has a history of depression which may diminish his responsibility for the offence, but is not at a level for him to be found not guilty by reason of insanity.

Counsel said a psychiatrist is meeting Harnett to put together a report and asked the judge to grant bail to allow the psychiatrist continue his work. He said it is more difficult to get psychiatric reports completed when a person is in custody.

Mr Gageby added his client has been on bail under strict conditions for two years and there has been no breach of those conditions.

Justice Michael White, having heard evidence from Det Sgt Fergus O’Brien about the assaults on each child, refused bail, saying Harnett has pleaded guilty to four attempted murder charges “of the most serious nature”.

The judge said he is “strongly of the view” that Harnett should not be on bail and remanded him in custody.

Tearful members of Harnett’s family lined up to hug him before he was led away by prison officers.

A sentencing hearing will take place on October 8th.