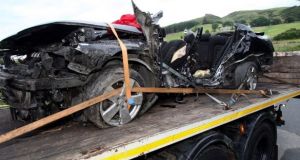 The temporary release from jail of a man who killed eight people in a Donegal road collision, has caused upset among some of the victims’ relatives .

Shaun Kelly was initially jailed for two years when he pleaded guilty to dangerous driving causing the deaths in Buncrana, Co Donegal in July 2010.

However, the Court of Appeal decided that sentence was too lenient and added another two years to the sentence originally given on December, 2014.

Kelly, from Ballymagan in Buncrana, is not due for release until December 2018.

Seven of the men who died were passengers in Kelly’s car aged between 19 and 23 . The eighth was a 66-year-old man on his way back from bingo.

Relatives of some of those killed have been left shocked after he was granted temporary release from jail.

He was recently seen with two friends tending to shep at lands on the Inishowen Peninsula. The men arrived in a VW Passat but Kelly was not driving as he is also serving a ten year driving ban as part of his sentence.

It is understood Kelly spent the rest of the time since he was released on Friday in and around his home at Hill Head, Ballymagan .

One family member of one of the young men killed in the crash, said they had not been informed by prison authorities but learned from another family about Kelly’s release.

“It just doesn’t make sense. He’s only half-way through his sentence and he’s allowed out. We didn’t know anything about it until we got a phonecall from another of one of the families telling us.

“Things are still very raw that the court case dragged on for so long and that he didn’t start his sentence until more than five years after he killed all those people.

“Some people will say that we have to move on but how would they feel if they say the man who killed their brother or son back in their town when he was only half-way through his punishment?” said the family member.