Hundreds of police investigations reviewed due to forensics concern 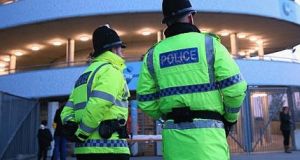 Greater Manchester Police say they are investigating an alleged quality failure at Randox Testing Services (RTS) and that two people have been arrested. Photograph: Getty images

Almost 500 police investigations are being reviewed after a criminal probe was launched into the actions of staff at a forensics lab used by forces nationwide.

Two men have been arrested by Greater Manchester Police (GMP) over allegations that some 484 cases handled by Randox Testing Services (RTS) were affected by what the the National Police Chiefs’ Council (NPCC) called “data manipulation”.

It raised the prospect that hundreds of people could have been the victims of miscarriages of justice because of convictions based on incorrect test results in their cases.

Dorset Chief Constable Debbie Simpson, the NPCC lead for forensic science, said: “We have been made aware of a quality failure with Randox Testing Services (RTS) which is currently being investigated and a criminal inquiry has been launched by Greater Manchester Police.

“Randox has provided each force with a list of cases that could have been affected. Working in partnership with the Crown Prosecution Service, we have provided guidance to forces so they are able to review each case to determine if compromised data played a part in prosecution and the CPS will then take appropriate action in any cases identified.

RTS, based in Northern Ireland with offices in London and Manchester, says on its website that it is “a world leader in clinical diagnostic solutions with offices and distribution in over 145 countries”.

It is part of the Randox Labratories group, which includes Randox Health, the sponsor of UK horse racing’s premier event, the Grand National.

RTS’s website adds that it is “entrusted by the majority of UK police forces to provide forensic toxicology testing”.

In a statement on the website it said that the issue “came to light as a result of an internal investigation” and that the investigation was limited to its Manchester site, and two men who worked there for three years.

It blamed “the perverse actions of individual(s)”, adding: “Contrary to media reports, the internal investigation centres on the manipulation of quality control data, which supports test results. There is no evidence that either the samples or the quality control materials themselves were subject to interference.

“There is no evidence from our internal investigations that the processing of alcohol samples has been affected. Alcohol analysis in drink-drive cases is not conducted at RTS Manchester.”

GMP said that two men, aged 47 and 31, had been arrested on suspicion of perverting the course of justice and bailed until next month.

A force spokeswoman confirmed it had been asked to investigate “forensic results issued by Randox Testing Services”.

She added: “Randox Testing Services have provided forensic services to police forces, including GMP, for the past two years. The organisation is being fully co-operative (with) the investigation.”