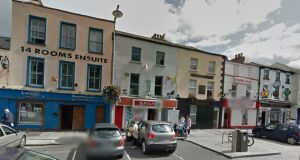 Thorncastle Street in Ringsend in the south of Dublin where the robbery took place.

A man in his fifties has been arrested and a gun recovered after an armed raid on a shop in Dublin on Saturday.

The robbery happened at a convenience shop on Thorncastle Street in Ringsend in the south of the city shortly before 6pm.

The man entered the shop with a loaded handgun and threatened staff before stealing a sum of cash and running away.

A garda patrol in the area arrested a man close to the scene a short time later. A gun and cash have been seized.

The firearm has been sent to the Forensic Laboratory for ballistic examination.

The man is being detained at Irishtown Garda station.