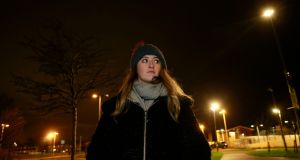 Emily Lyon organiser of the “Take Back the Night” walk in Shankill/Killiney on Friday night at Shankill Dart station. Photograph Nick Bradshaw

From the houses on nearby Rathsallagh Drive the difference was immediate. You could see the cars driving along Corbawn Lane and the short walk through the adjacent park toward Shankill village seemed less foreboding.

The move was in response to a series of sexual assaults in the area, which are being investigated by gardaí.

Despite this response the community is still struggling to come to terms with the attacks more than a year later.

“People talk about it,” says John Connor matter-of-factly, as he steps into his driveway overlooking the train station

He has lived here since 1975 and, pointing to the green area in front, explains its long-established use as a short-cut to the nearby village and surrounding housing estates. One of the attacks happened nearby.

“People were talking about someone just travelling on the Dart, because locally you have ideas about people,” he says, repeating a familiar theory here that the attacker, or more than one of them , used the train as an entry and exit point.

Last night residents met at the station to begin a 5km walk to oppose sexual violence in a loop stretching into Killiney and enveloping the affected communities.

“What prompted me was just hearing about people making changes in their routine . . . my friends not wanting to do x, y or z,” says 23-year-old Shankill charity worker Emily Lyon, who organised Friday’s “Take Back the Night” walk.

Similar events around the world have aimed to face down the threat of sexual violence and to provide a pillar of support for those who have suffered it.

“It was born out of frustration; saddened for people not wanting to do things,” Lyon said before the walk, word of which had appeared to spread quickly.

“It’s not going to catch any perpetrator but I just thought it would be good to get the community together. It’s scary and people shouldn’t feel like that in the place where you live, in your community.”

In the broader Shankill area the sense of apprehension lingers . Yet while the events of the last 15 months are clearly serious, they are also complex.

What prompted me was just hearing about people making changes in their routine . . . my friends not wanting to do x, y or z

The first assault took place in December 2015 at Vietnam Lane. The next month a woman was targeted on Corbawn Lane, which runs perpendicular to the railway track and is lined by a strip of tall trees. In February, another woman was assaulted on Quinn’s Road.

Three attacks in quick succession sparked an obvious local response, although gardaí encountered varying descriptions of perpetrators and of their modus operandi .

In the Quinn’s Road incident, there was a major breakthrough. After exhaustive investigations, detectives charged a man linked to at least a half-dozen serious assaults around the country. However, he was not believed to be involved in the first two attacks and has since died.

In January, a woman in her 40s was grabbed from behind as she walked near the Bayview estate in Killiney, but managed to fight off her attacker. He fled and the only description available is of a man about six foot tall and of slim build.

There was another incident in February, although gardaí have a definite line of inquiry and are satisfied the two are not connected.

Of the five assaults, three are unsolved. Whatever anybody’s reading of what has happened in this part of south Dublin, many locals remain ill at ease.

“That field there was a hunting field,” says a young woman, pushing a pram near Shankill train station. Her words are dramatic, but her tone is calm and weighted.

Her elder companion mentions a 14-year-old girl who was too scared to take the Dart to school.

Some views are more tempered. In a nearby estate a woman is unconvinced by the walk. Gardaí are doing what they can, she says, and worries about the corrosive effect of Chinese whispers.

Friday night was apolitical but the situation has attracted a political response. Dún Laoghaire-Rathdown cathaoirleach Cormac Devlin agitated for the street lighting that appeared in the area last year.

“It’s a worry for parents with teenage daughters walking home,” he says. “I can understand why people want to march and say they are not afraid.”

In the Garda incident room in Shankill, aerial photographs of the crime scenes hang on the wall. Supt Martin Fitzgerald sets out the “top priority” response to each of the five crimes, which have involved hours of work, often exhausting reviews of hundreds of hours of CCTV footage and chasing down leads.

“We understand the concerns of the community and part of this process is an attempt to reassure them that we are giving it that level of attention,” he said, surrounded by a team of detectives.

They update the public through a local forum and residents’ association, but they walk a fine line between reassurance and maintaining the integrity of ongoing investigations.

The theory of an assailant using the train is one they have thoroughly explored.

“That is a legitimate concern for us,” says Supt Fitzgerald. “And we are consulting and liaising with our colleagues along the Dart line.”

Specifically, they analyse similar crimes to see if they can detect any patterns or similarities. In the last year, undercover gardaí have patrolled the area and the district’s Operation Imeacht increased high-visibility street patrols.

They say it is a three-pronged approach of prevention, community reassurance and solving those crimes that have already taken place. At the Garda level everything is being done, yet last night’s walk still attracted support and lent focus for anxieties that won’t let up.

At her home near the park and train station, Niamh Quinn (28) talks about how her mother and daughter had been walking close to the scene of the first attack not long before it happened. It gives her pause for thought.

“My friends have been saying we have been getting the Nightlink [bus service for a long time] and it feels super safe here, always has,” she says. “But people don’t feel safe here anymore.”