‘GunRunner’ jailed for sending weapons to states including Ireland 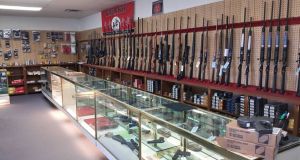 The Flint Hills Gun Works of Manhattan, Kansas, whose weapons and munitions Michael Ryan attempted to export illegally to Cork and Mallow.

A man has been sentenced to 52 months in jail in Kansas for gun-running to several countries, including Ireland.

Michael Andrew Ryan (36), also known as Brad Jones and “GunRunner”, from Manhattan in Kansas, pleaded guilty last June to six counts of exporting and attempting to export firearms illegally from the United States to individuals in other countries. A judge has now sent him to jail for just under 4½ years.

Ryan plied his trade on the so-called dark web, an encrypted communication system on the Tor network that connects people through a series of virtual tunnels allowing users to engage in secret. The Irish destinations for Ryan’s illegal arms trade included Cork and Mallow. He admitted to exporting, or attempting to export, several different types of guns and munitions.

They included, to Cork, a Beretta 9mm pistol, a Taurus .38 Special revolver, a 15-round 9mm magazine, 32 rounds of 9mm ammunition; one round of .380 ammunition and 41 rounds of .40 calibre ammunition.

Other destinations to where Ryan sent, or tried to send, guns and munitions included Pinner in England, Edinburgh in Scotland and Victoria in Australia. Similar types of weapons and ammunition to those linked to Ireland were earmarked for the other locations.

“These goods included dozens of firearms, including pistols, revolvers, Uzis and Glocks, some from which the manufacturer’s serial numbers had been removed, altered or obliterated, as well as magazines and hundreds of rounds of ammunition,” the US department of justice said in a statement on January 30th. The bulk of Ryan’s trade was destined for Ireland.

Confirmation that the weapons were actually sent to Ireland and received, as opposed to Ryan merely attempting to send them, has not been forthcoming from either US law enforcement authorities or the Garda Síochána.

Ryan’s lawyer, Christopher Joseph of Topeka, Kansas, did not respond to requests for information.

When he admitted his guilt last June, assistant attorney general Leslie Caldwell of the US Justice Department’s Criminal Division, said Ryan’s trade had been global and executed with apparent ease. “With a computer and an internet connection, Ryan hosted an international arms trafficking business on the dark web, peddling firearms and ammunition throughout the world,” Mr Caldwell added.

“Criminals of all stripes take advantage of technological advances to further their crimes and attempt to avoid identification and arrest. In this case, thanks to the hard work of the prosecutors and law enforcement officers involved, we were able to shut down dangerous criminal activity and secure the defendant’s conviction.”

In addition to jailing Ryan last Monday week, US district judge Daniel Crabtree of the district of Kansas ordered him to forfeit all firearms and ammunition seized by law enforcement during the investigation.