Man in his thirties fatally stabbed at apartment in Tallaght

Emergency services were called to Deerpark Avenue early on Saturday 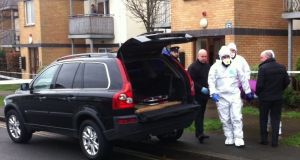 The body of a 32-year-old is removed from an apartment in Tallaght where he was fatally stabbed. 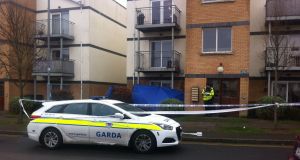 The scene at Deerpark Avenue in Tallaght where a man in his thirties was fatally stabbed. Photograph: Mark Hilliard/The Irish Times 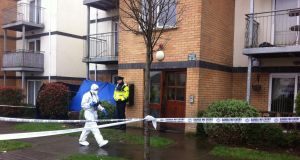 Gardaí at Deerpark Avenue in Tallaght where a man in his thirties was fatally stabbed. Photograph: Mark Hilliard/The Irish Times 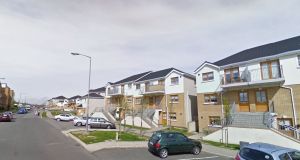 Deerpark Avenue in Tallaght where a man was fataly stabbed on Saturday morning.

A 32-year-old man has died after being stabbed at a block of apartments in Tallaght early on Saturday morning.

Emergency services were called to Deerpark Avenue at approximately 4.40am where the man’s body had been found with what appeared to be knife wounds.

Neighbours said the deceased had been living in the apartment with his partner and a young child.

No arrests have been made but a heavy Garda presence remained at the scene on Saturday.

There also appeared to be garda activity at a nearby address but it was not clear if this was in any way related.

As neighbours began to emerge onto the adjacent green area and surrounding balconies on Saturday morning, a patch at the front of the ground floor apartment remained covered by a blue tent.

The body was kept at the scene while the office of the State Pathologist was contacted. It was later removed in the back of a black Volvo ambulance at 12.20pm.

Garda forensic teams were carrying out investigations at the scene and could be seen taking photographs in the apartment block stairwell and lobby.

Neighbours had not heard any commotion in the street at the time the fatal stabbing is thought to have taken place but they did hear the arrival of gardaí to a neighbouring address at about 6am. There was no confirmation from gardaí that the two incidents were connected.

“It isn’t the first time around here. It’s becoming the norm,” said a local woman of the attack.

“It’s all the time up here now. It’s getting worse, normal for the kids here [to see].”

Other neighbours made similar remarks about the level of anti-social activity in the area.

Children gathered around the apartment block, playing on scooters and watching the comings and goings of detectives, examining and discussing the scene.

“The kids would say, ok there is a body under the tent there,” the mother said, explaining the normality of local crime and lamenting what children were exposed to.

“The kids around here could tell you more than anyone,” the mother said.

Witnesses or anybody with information have been asked to contact Tallaght garda station on (01) 666 6000, the Garda Confidential Telephone Line on 1800 666 111 or any other station.