Man arrested in connection with fatal stabbing in Tallaght 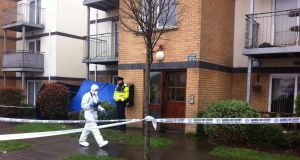 The scene at Deerpark Avenue in Tallaght where a man in his 30s was fatally stabbed. Photograph: Mark Hilliard/The Irish Times

A man in his early 40s has been arrested in connection with a fatal stabbing incident in Tallaght, Dublin.

Graham McKeever (32) died after being stabbed at his home in Deerpark Avenue in the early hours of Saturday morning.

His body was taken to Dublin City Morgue in Whitehall where a postmortem was carried out. The scene was preserved and a full technical examination took place.

He is currently being detained at Tallaght Garda station under Section 4 of the Criminal Justice Act, 1984.

Local residents said the deceased had been living in the apartment with his partner and a young child.

Neighbours had not heard any commotion in the street at the time the stabbing is thought to have taken place, but they did hear the arrival of gardaí to a nearby address at about 6am. There was no confirmation from gardaí that the two incidents were connected.

“It isn’t the first time around here. It’s becoming the norm,” said a local woman of the attack.

“It’s all the time up here now. It’s getting worse, normal for the kids here .”

Witnesses or anybody with information have been asked to contact Tallaght Garda station on (01) 666 6000, the Garda Confidential Telephone Line on 1800 666 111 or any other station.