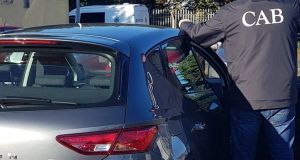 A 24-year-old man has been arrested for money laundering after a Criminal Assets Bureau raid on a drugs gang last September.

The man is currently being held at Clondalkin Garda Station after he was arrested by Cab officers on Tuesday morning.

Gardaí believe the gang members were using the garage to conceal and launder the wealth they had derived from drug dealing.

The Criminal Assets Bureau seized an Audi A4, and VW Passat, a Mercedes C220 and a 152 Seat Leon, as well as an expensive Hublot watch and a number of designer handbags.

Some €145,000 on deposit in bank accounts was also frozen and put beyond use.