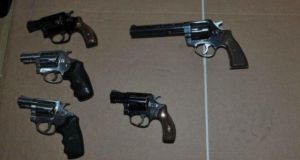 The arsenal included handguns laid out on a piece of cardboard, primed, armed and ready to be used, gardaí said.

In almost every way the warehouse in Greenogue Business Park operated by Declan Brady appeared to be a legitimate transport business.

There were desks, shelves full of labelled folders and two forklifts parked towards the back. The signs matched the name of a respected haulage firm operating in the UK.

But the pages in those folders were blank and the two forklifts were rarely used. The UK haulage company on the signs did not operate a branch in Ireland.

The whole operation was an elaborate cover for what was going on upstairs where Brady had assembled and maintained a terrifying arsenal of weapons for use at a moment’s notice by the Kinahan crime gang.

When gardaí from the Drugs and Organised Crime Bureau and the Emergency Response Unit moved in on January 24th, 2017, they found 17 guns including pistols, revolvers, a submachine gun and an AK47-style assault rifle.

Four of the handguns were laid out on a piece of cardboard, “primed, armed and ready to be used,” gardaí said.

They also found silencers, tracking devices and more than 4,000 rounds of ammunition. More ammunition was found in a secret compartment in a van parked on the premises.

The raid was the culmination of a lengthy Garda operation involving covert bugging, surveillance and the use of confidential informants. Some of the covert activity was carried out by members of the secretive National Surveillance Unit.

Gardaí investigating organised crime had come across gangland arsenals before – the previous November, five firearms, including two submachine guns belonging to the Kinahans, were seized.

However, they had never seen something of this scale and sophistication. In fact, detectives believe it was the largest organised crime arms find in the history of the State.

Brady was under instructions from senior members of the Kinahan cartel based in Spain to run the arms cache like an arsenal, with weapons being prepared for use before being sent out to the gang’s death squads.

Brady himself never got involved with the nitty-gritty of transporting weapons. In fact, he made a point of not handling any firearms whatsoever.

It was this discretion and intelligence which made Brady, or Mr Nobody as he was nicknamed, so vital to the Kinahan operation. He had no previous convictions aside from some motoring offences and appeared to be a successful, legitimate businessman.

Afterwards gardaí, with some justification, believed they had prevented a bloodbath. The Hutch-Kinahan feud, which has claimed up to 20 lives to date, was at its height in January 2017. By that stage, it had started to look less like a feud and more like a massacre of Hutch associates, such was its one-sided nature.

The raid occurred two weeks before the anniversary of the Regency Hotel shooting which gardaí feared could be marked by an outburst of violence.

“You’ll notice that things started to drop off in intensity after Greenogue, not completely but there was a turning point.” one detective said. “We think the operation did a lot to slow down the violence.”

In the Criminal Courts of Justice yesterday, detectives were visibly pleased with the long sentence imposed on Brady, as well as the 7½-year term given to Kinahan associate Paul Beatty, who was caught with a loaded revolver in Dublin city centre last year.

“These convictions are a very positive outcome for local communities and investigators,” Det Supt Seamus Boland of the Drugs and Organised Crime Unit said. “They mean 18 military-grade firearms and associated ammunition being removed from circulation.”