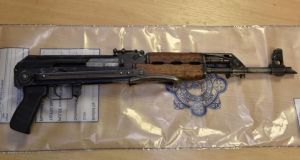 Part of firearms cache recovered in raid on fake business in Rathcoole, Co Dublin, in 2017.

International police forces are examining the gangland armoury uncovered by gardaí for lessons in how organised crime gangs operate in their own countries.

In January 2017, the Drugs and Organised Crime Unit raided a fake business in Rathcoole, Co Dublin, and recovered 17 firearms and more than 4,000 rounds of ammunition. The weapons included a sub-machine gun, an AK-47 style assault rifle and four revolvers which were loaded and ready for use by members and associates of the Kinahan crime gang.

The case concluded on Monday with the sentencing of Declan Brady (53), a man described by one detective as the “quartermaster general” for the Kinahan crime gang.

Gardaí believed Brady ran the warehouse as a centralised arms supply depot for the gang.

“Murder kits”, comprising a gun and ammunition, were assembled in the warehouse before being distributed in plastic bags around the city for use in assassinations of rival gang members, usually members of the Hutch criminal organisation, which the Kinahans have been feuding with since 2016.

Even investigating gardaí were taken aback by the scale of the arms find and the sophistication of the operation. It was the largest organised crime arms cache ever uncovered by gardaí.

Most criminal gangs source guns as they are needed on a one-off basis, maintaining at most a handful of firearms at any one time. However, the Kinahan gang’s desire for self-sufficiency led to it accumulating, storing and maintaining large number of powerful weapons which could be deployed at a moment’s notice.

The Garda is now sharing information on the operation with its European colleagues who are keen to establish if arms caches of a similar scale are being operated by organised crime gangs in their own countries.

Gardaí believe only the most senior members of the Kinahan gang knew about the warehouse. Gunmen recruited to murder rival gang members were not privy to its location and instead took delivery of the weapons close to where their intended targets were located.

The jailing of Brady, who was sentenced to 11½ years (with the final year suspended) by the Special Criminal Court, represents a major achievement for gardaí and their efforts to proactively dismantle the machinery of the Kinahan gang rather than just responding to murders as they occur.

Detectives believe the seized guns were replaced by the gang within a relatively short period of time but that the loss of a highly skilled and discreet associate such as Brady will be a major blow.

Brady was given the nickname “Mr Nobody” because he appeared to almost everybody as an unremarkable, legitimate businessman. He has no major previous convictions and only appeared on the Garda radar after detectives became aware that the Kinahans were operating an arms depot from a fake business.

Two other men arrested in the warehouse, Jonathan Harding (44) and James Walsh (33) were previously jailed for nine and eight years respectively for their roles in the operation.

Also on Monday another Kinahan associate, Paul Beatty (32), was jailed for 7½ years for possession of a loaded revolver in the city centre in 2018.

Tourists with plans to travel to China should be able to cancel at no cost 17:19
Mother of three McGinley children appears in court charged with their murder 17:08
Girl (7) settles case over alleged brain injury at birth for €5.8m 16:55
Fianna Fáil promises to ban credit card betting if elected 16:54
Man dead in ‘superloo’ for up to 20 hours before discovery 16:39