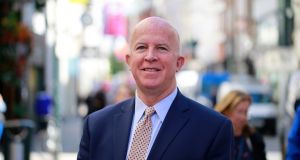 NYPD police chief James O’Neill in Dublin. The commissioner will be a guest speaker at this year’s I.NY Festival which takes place in Limerick in October. Photograph: Nick Bradshaw

Police forces must be fully resourced and highly visibly in the community to tackle localised crime waves, New York police chief James O’Neill has said on a visit to Dublin.

The New York Police Department (NYPD) commissioner said he changed the largest police force in the US – putting specialised police units back “on patrol” in communities – to try to rebuild trust after high-profile incidents of police brutality.

“Whatever policing you are going to do, it has to be properly resourced, you have to have the right number and it requires investment,” he said when he shared ideas with members of An Garda Síochána on community policing.

The high-profile Irish-American policeman, one of the most senior figures in US law enforcement, spoke to The Irish Times ahead of today’s launch of a festival in Limerick scheduled for October.

Mr O’Neill, whose grandparents emigrated from counties Monaghan and Longford, will be a guest speaker at this year’s I.NY Festival which celebrates the relationship between Ireland and New York and will be taking place October 12th-20th.

The commissioner has introduced changes since 2014 when black Staten Island man Eric Garner died after a New York police officer gripped him around his neck in a chokehold during a videotaped arrest.

Mr Garner’s death was one of a number of fatal encounters between black people and the police that triggered the national “Black Lives Matter” movement and sparked changes in policing practices across the US.

The New York police chief said the force had to introduce reforms in response to the incident.

“We can’t work in a vacuum in the city but it is New York, it is the largest police force in the United States, ” he said.

“This pivot in 2014 – there was the need for change. It wasn’t driven by any national policy. It was driven by the experience of the people I work with.”

Mr O’Neill cited statistics showing a reduction in crime as a result of the shift to putting more police officers into New York neighbourhoods.

Asked about how a large police force can be changed culturally – in light of the reforms required at the Garda – the commissioner said that it was important to be “careful and that you don’t look back and not acknowledge all the good work that’s been done in the past”.

“You can’t discard that – you have to recognise the history. But with that, you have to be willing to change. Will everybody change at the same rate? Probably not,” he said.

Last month, Mr O’Neill won plaudits for issuing an apology on behalf of the NYPD for the 1969 police raid at the Stonewall Inn, a gay bar in Manhattan’s Greenwich Village that catalysed the modern LGBT rights movement, ahead of the 50th anniversary of the raid.