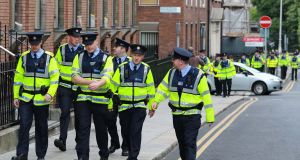 There was nearly a 10 per cent increase in satisfaction with the force, compared to the 2016 annual survey. File photograph: Nick Bradshaw/The Irish Times.

The public perception of national and local crime as a serious or very serious problem has decreased in recent years, according to a Garda survey published on Tuesday.

In the last two years, the perception of national crime as a serious problem fell from 77 to 73 per cent, according to the Garda Public Attitudes Survey 2018.

Since the 2016 survey the perception of local crime as either serious or very serious also fell from 24 to 19 per cent.

The public attitudes survey consists of over 6,000 face-to-face interviews, and quarterly bulletins of the results are released throughout the year.

The 2018 annual survey found the victimisation rate, which is the percentage of those surveyed who had been recent victims of a crime, stood at six per cent.

There was nearly a 10 per cent increase in satisfaction with the force, compared to the 2016 annual survey.

Three quarters of people surveyed agreed that gardaí in their local area could be relied upon when needed.

Women, older people, and non-Irish nationals were all likely to have greater trust in the gardaí than men, according to the survey results.

People living in cities were less likely to have high levels of trust in the force, as were respondents who had been the victims of crime in the past year.

The number of people who had “a lot of fears” about the level of crime in Ireland fell from seven per cent in 2016, to three per cent last year.

However, the number of those surveyed who said they had “some fears” about crime levels increased from 27 to 30 per cent over the past year.

The proportion who said they had no fears about crime fell, from 40 per cent in 2017, to 34 per cent last year.

Nine out of ten people reported a medium to high level of trust in the police force, and 93 per cent said they felt gardaí would treat them with respect if they needed to contact an officer.

From a smaller pool of 16 to 17-year-olds surveyed, 86 per cent described themselves as satisfied with the garda service in their local area.

Tackling sexual offences was ranked as the top priority for gardaí across nearly all demographics in the survey.

Some 61 per cent of people felt the garda presence in their local area was not sufficient, and only 38 per cent of respondents said they were aware of garda patrols in their community.

The Garda survey found there was a link between people reporting more awareness of patrols in their area, and the fear of crime decreasing.

“Trust in, and satisfaction with, An Garda Síochána is very high by international standards. This is as a result of the close connections we have with communities,” he said.