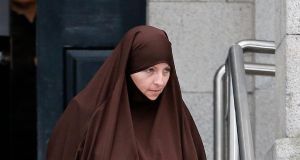 Lisa Smith leaves a Garda station in the northeast after signing on as part of her bail conditions. Photograph: Crispin Rodwell

Lisa Smith, the former Defence Forces member now charged with membership of terrorist group Isis, has signed on at a Garda station for the first time since being granted bail.

The 37-year-old signed on at a Garda station in the north east early on Wednesday and must sign on again in the afternoon as part of her bail conditions.

Ms Smith was granted bail just before Christmas but issues arose with raising the €5,000 surety required, some €1,000 of which had to be lodged as part of conditions set down by the High Court.

Those difficulties took time to resolve meaning she spent Christmas on remand in prison. However, she was finally able to take up her bail on Tuesday after the financial conditions of her bail terms were satisfied.

She was then released from Limerick Prison where she had been held on remand and after meeting family members was taken to an undisclosed location to stay.

As part of strict bail conditions set by the courts, Ms Smith must reside at an address in the northeast and sign on at a Garda station twice daily from 10am-1pm and 3pm-6pm.

She was also ordered to obey a curfew, having to remain indoors from 8pm to 7am and cannot leave the jurisdiction or apply for travel documentation.

She must also provide gardaí with a contact mobile phone number within 48 hours of taking up her bail.

Ms Smith, who denies the charge she now faces, has also been banned from accessing the internet or using any social media. She must also make no efforts to contact any non-Garda witnesses in the case.

She has been remanded on bail to appear before Dublin District Court again on January 8th.

Ms Smith, who was previously in the Army and later the Air Corps, left Ireland four years ago and married after she converted to Islam. She was later found in a Syrian refugee camp.

Following a trek to Turkey with her daughter, she was brought back to Ireland on December 1st. She was arrested at Dublin Airport on arrival and has since been brought before the courts charged with membership of Isis.