Permanent order restrains protesters from interfering with fit out of accommodation 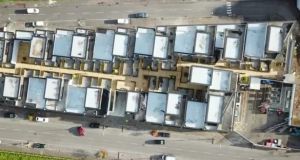 An aerial view of the building in Ballinamore Co Leitrim that has been proposed to accommodate asylum seekers. Photograph: Lorraine Teevan

An injunction permanently restraining protesters from interfering with the fitting out of accommodation for asylum seekers in Ballinamore, Co Leitrim, was granted in the High court today by Mr Justice Max Barrett.

The interlocutory restraint was made in favour of Remcoll Limited and is against defendants Fred Walsh, Gordon Hughes, Ita Reynolds, Bryan Cribben, Adrian Smith, Desmond Wisley and “person s unknown.”

Bernard Dunleavy SC, who appeared with barrister Anthony Thuillier and solicitors Clark Hill for Remcoll, was granted a temporary injunction restraining the protests which has been in place until Monday and replaced with the permanent restraints.

Judge Barrett said Remcoll owned The Rock Centre building in Ballinamore and had been engaged in works on the property for the fulfilment of a contract with the Department of Justice and Equality to provide sheltered accommodation for 25 families seeking asylum in Ireland.

He said when word as to the intended occupants had become public knowledge the property had been beset by a 24-hour non-stop protest which had been preceded by an attempt to burn down the premises.

“The protest was marred by singularly inappropriate behaviour that included intimidation, bullying, vandalism, the erection of a steel mesh stockade and even escalated to the point where the interior was penetrated and wall-to-floor barricades erected inside,” Judge Barrett said today.

He said Remcoll believed the named defendants occupied leadership roles in respect of the protest and it had not been disputed that each of them had participated in the protest.

Nor, apart from the attempted arson which had preceded the protest, had any of the singularly inappropriate behaviour that transpired during the protest been disavowed by the defendants.

Judge Barrett said the protests had ceased immediately on the granting of the interim injunction.

During earlier hearings Judge Barrett had been told the named defendants believed they had been “somewhat blackened” by the allegations that had been made against them.

Their lawyer Maura McNally SC had told the judge they were upstanding members of the community, including a local representative, a member of a State Board, a chemist and an auctioneer.

She said each of them had taken umbrage at the allegations and wanted to address them in their own sworn affidavits rather than in a collective statement.

Judge Barrett said that in affidavits by the defendants in which they had denied allegations of particular conduct there had been no effort by any of them to aver to what had in fact occurred.

Having traversed existing legal authorities regarding the granting of restraints on members of the public and protesters the judge said the court would grant the permanent injunctive relief being sought, subject to the continued provision of an undertaking as to damages.