Man and woman found dead in Belfast flat on Monday 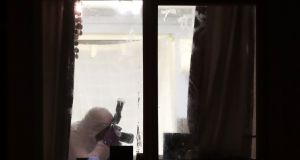 A PSNI forensic officer in a second floor apartment in a building on Kinnaird Close, Belfast, after the bodies of a man and a woman were found. Photograph: Liam McBurney/PA

A 35-year-old man charged with murdering two friends found dead in a north Belfast flat has “made full admissions”, a court heard on Thursday.

Steven McBrine is accused of killing 37-year-old Frances Murray and Joseph Dutton (47) after a row.

Entering the dock in handcuffs, he nodded to confirm that he understood the allegations against him. No bail application was made during the brief hearing.

Defence solicitor Denis Moloney described the case as a “great tragedy” involving friends who had been drinking together.

He put it to an investigating detective: “During interview the defendant... gave a full and frank account.”

The detective replied: “He made full admissions to it.”

Mr Moloney told the court Mr McBrine and the two victims were friends who lived close to each other.

“The defendant knew the parties concerned, they had been out together,” he said. “Unfortunately a dispute has arisen and two people ended up dead. The defendant was fully co-operative with the authorities.”

Mr McBrine was remanded in custody and will appear again by video-link on January 23rd.

Police were called to Kinnaird Close after a member of the public reported the victims’ bodies had been found.

Other residents in the apartment complex and nearby homes were evacuated for a time as a major operation was launched.

Detectives believe some sort of altercation took place in the flat where Ms Murray and Mr Dutton were discovered. They are also trying to locate a bag of blood-soaked clothing thought to have been discarded in the local area.