Man arrested over alleged rape on a ferry in Rosslare 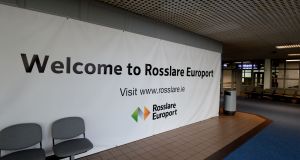 The terminal building at Rosslare Euro Port. Gardaí are investigating an alleged rape on a ferry at Rosslare over the Christmas period. Photograph: Alan Betson/The Irish Times

A man in his 50s has been arrested and questioned over an alleged rape on board a passenger ferry in Rosslare, Co Wexford over the Christmas period.

Detectives arrested the man after they received a complaint from a woman in her 30s claiming she was raped while aboard the ferry.

The woman alleged she went to sleep in her cabin and woke to find a man having sex with her without her consent.

Gardaí did not receive a complaint from the woman immediately. When she did contact gardaí, they discovered the ferry had sailed from Rosslare.

Gardaí contacted police at the port where the ship was due to dock and police officers met the ship on arrival and boarded the vessel.

Police technical experts in the overseas port carried out a forensic examination of the woman’s cabin and took a number of exhibits from the cabin.

It is understood these exhibits, which include bed clothes and other items, will be forwarded to gardaí to assist in their investigation into the alleged rape.

Meanwhile, gardaí in Wexford arrested a suspect in his 50s whom the woman identified to them and he was brought to Wexford Garda station.

He was questioned under Section 4 of the Criminal Justice Act for several hours before being released without charge on Sunday.

A Garda spokesman said gardaí would prepare a file on the matter which they hope to forward to the DPP in the coming weeks.