Victim critical after being shot a number of times on Carrickphierish Road at 2.15pm 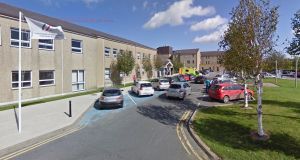 The man was treated at the scene before being taken by ambulance to University Hospital Waterford . Photograph: Google Street View

A man was shot and seriously wounded while leaving a shop in Waterford city on Monday afternoon.

The incident took place near the Mount Suir apartments on the Carrickphierish Road at about 2.15pm. It is understood the man was shot three times, receiving wounds to his back, chest and stomach.

A heavy Garda presence was at the scene on Monday evening and witnesses said gardaí had deployed equipment including a battering ram to gain access to apartments. No arrest had been made by Monday evening in relation to the investigation, which was described as ongoing.

Witnesses phoned for help and the injured man, who is understood to be from the locality, was initially treated by the ambulance crew before he was taken to University Hospital Waterford in a critical condition.

The scene was preserved for examination by gardaí and the road remained closed.

One local man said people in the area were in “total shock” at the shooting. “Normally at this time the place is full of children and teenagers, especially with the Christmas holidays,” said Thomas Healy, who is chairman of the Mount Suir residents’ association.

He said he and his wife saw the injured man on the ground following the shooting. “The estate isn’t different to any other but there are a lot of antisocial behaviour problems,” he said.

“It’s still early days but this is a serious thing that has happened, especially two days before Christmas,” the Independent councillor said.

An incident room has been established at Waterford Garda sttation where a case conference was held by investigators on Monday evening. Gardaí are examining all circumstances surrounding this incident . No arrests have been made and enquires are ongoing.

Gardaí are appealing to pedestrians or motorists who may have been in the area near the Mount Suir Apartments between 2pm and 2.30pm on Monday, who may have dashcam footage, to contact Waterford Garda station on 051-305300, any Garda station or the Garda Confidential Line 1800 666 111.