‘I want to forgive them,’ says father of boy (15) racially abused and assaulted in Crumlin 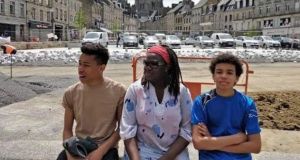 Sean Munnelly (right) with his mother Sylvie and brother Finn

The father of a 15-year-old boy who was physically assaulted and racially abused by a group of men in Crumlin last week has said he forgives the attackers and does not want to encourage further division in the community.

Gardaí are investigating after Seán Munnelly was attacked by three men in Eamonn Ceannt Park in Crumlin in the early afternoon of Monday, September 21st.

The 15-year-old was brought to Crumlin children’s hospital where he was treated for punches to his face and kicks to his head. Seán returned to school last Monday after taking a week off to recover from his injuries, his father Thierry told The Irish Times.

Describing his son as a “quiet” and “gifted” teenage boy who loves building computers, Thierry said the family “couldn’t comprehend” why an adult man would attack Seán.

He said his son was hanging out in the park when the three adults started shouting at the group.

“The boys got a shock but whatever Seán said back meant they gave him a dig in the head. He can’t really remember what happened after that. It was completely random with racial slurs.

“His 14-year-old friend tried to stop the men and another friend got pushed up against a wall. None of his friends gave up on my son and they stood by him.”

Thierry rushed to to the park after receiving a call about the attack and found his son severely beaten up. “He was trying not to cry but you could see he was bawling inside. I’ve gone through some crazy things in my life but when it’s someone you love in trouble, you just want to take away their pain.”

Thierry, who is a teacher and community worker in Crumlin, believes he once worked with one of the young men who attacked his son. However, he is keen to highlight that he only wants to forgive the men for what they did.

“I know my son will forgive them, that’s what he’s like. And I want to forgive them too. We should embrace diversity and not encourage division.”

Thierry recalls how he and his wife Sylvie, who is originally from Burkina Faso, often got “looks” bringing up a mixed race family in Crumlin but that Ireland “is gradually changing” when it comes to embracing its more diverse population.

“My kids ain’t black, they ain’t white, they’re the best of both, they’re mixed race. And Ireland has a huge community of mixed race kids.

“They have had the ‘n’ word thrown at them and that’s crazy, it isn’t right. We need to educate people to have a different mindset. You’re not born to hate.”

Thierry says his son’s physical injuries are healing quickly and that he’s happy to be back in school and building computers with his friends. He hopes Seán, who was diagnosed with “gifted intelligence” at a young age, can return to the DCU Centre for Talented Youth where he has attended classes before. “For my kid to have friends who are geeky in a good way gives me comfort. Seán is a forgiving guy so I hope we can all move forward.”

Thierry plans to use his own experiences of the barriers he encountered through life to help educate young people in Crumlin to create a more inclusive community. “I want the situation to get better, I don’t want to get bitter. I want healing in our neighbourhood.”