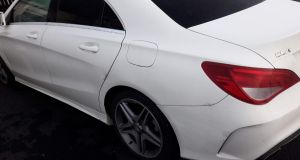 The 141 Mercedes car which was seized during searches of four properties in Listowel, Co Kerry. 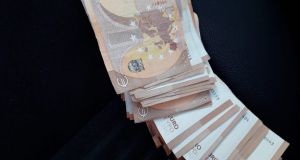 Some of the €12,600 in cash that was seized during searches of four properties in Listowel, Co Kerry.

The Criminal Assets Bureau has targeted a suspected drugs gang in Listowel, Co Kerry, and seized cars, cash, cocaine and expensive jewellery during a series of searches on houses in the town.

One of the four houses searched on Friday has been extensively renovated at a cost, according to sources, of several hundred thousand euros.

Those renovations are believed to have been paid for with the proceeds of the drugs trade.

The operation is the latest in a series of raids on medium-sized drugs gangs operating in rural Ireland.

Senior officers say the value of the drugs trade across the Republic grew strongly in the years before Covid-19 and, with drugs now widely available across the State, drugs gangs are established in all parts of the country.

While some drugs gangs are relatively small, the profits from selling drugs were very significant for those who controlled even part of the market in regional towns.

While the Cab searches in Listowel on Friday came less than 48 hours after some €4 million was found during searches in counties Kerry and Laois, there is no connection between the two.

The millions found on Wednesday - at a house in Lisselton, between Listowel and Ballybunnion, and in another property in Mountmellick - is linked to a Dublin-based drugs gang and was seized by members of the Garda National Drugs and Organised Crime Bureau.

The Cab raid on Friday targeted a group in Listowel that has been dealing drugs mainly in north Kerry and west Limerick.

Gardaí searched four houses linked to the group and also the offices of one professional services company that members of the group were believed to have used.

During the searches on Friday gardaí found and seized €12,600 in cash, a 141 Mercedes car, two Rolex watches, a stolen caravan, suspected cocaine valued at about €2,000 along with mobile phones and documents.

Cab investigators were due to examine telephones records and financial documents in a bid to establish if the gang members had other assets that could be investigated and possibly seized.

Gardaí working in the Kerry division placed the gang under surveillance and gathered intelligence over a period of time after observing the trappings of wealth the gang members were displaying.

A report was compiled by a Garda member trained to profile wealth and this was sent to Cab.

Garda sources said the searches were a major part of the investigation, adding it would continue and that valuable evidence and intelligence had been gathered during the operation.