‘Hooded men’: court rules treatment of men would be torture if deployed today 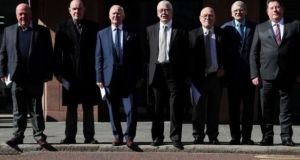 An image from March 2018 showing seven of the 14 ‘hooded men’, who were kept in hoods while interned in Northern Ireland in 1971. (From left) Jim Auld, Patrick McNally, Liam Shannon, Fracncie McGuigan, Davy Rodgers, Brian Turley and Joe Clarke. Photograph: PA

Interrogation techniques used against the so-called Hooded Men during internment in Northern Ireland would be torture if deployed today, the Court of Appeal has ruled.

In a majority decision, senior judges held the group had a legitimate expectation police would further investigate claims their treatment was sanctioned by the British Government.

A probe carried out after allegations of ministerial involvement emerged in a 2014 television documentary was found to be irrational and failed to honour an undertaking given by former Chief Constable George Hamilton.

But the court rejected claims the State was in breach of a legal obligation to carry out a full and independent inquiry into the affair - because the events occurred decades before human rights legislation came into force.

The verdict came in a failed appeal by the Police Service of Northern Ireland against a previous ruling that its decision to end preliminary inquiries into the men’s deep interrogation back in 1971 was seriously flawed and should be quashed.

Surviving members of the 14 Hooded Men brought the original case against the chief constable, secretary of state and the UK department of justice.

They argued the authorities have failed to comply with duties under the European Convention on Human Rights to properly probe and order a full inquiry into what happened to them while interned at British Army facilities in Ballykelly, Co Derry.

The techniques used against the men while they were held without trial included: being hooded, made to stand spread-eagled in a stress position against a wall and beaten if they fell; forced to listen to constant loud static noise; and deprived of sleep, food and water.

Proceedings were brought by one of the men, Francis McGuigan, and the daughter of Seán McKenna, a school caretaker taken from his Newry home in August 1971.

Mary McKenna claimed her father was bitten by a soldier’s dog and had to drink from the animal’s dish in treatment that “ruined” him and worsened a heart condition that led to his death four years later.

Amid claims the men’s treatment was sanctioned by the State, the court heard former British prime minister Edward Heath was involved in the decision-making process.

Stormont’s prime minister at the time, Brian Faulkner, was also personally briefed on the deployment of the techniques, according to their case.

RUC Special Branch officers were said to have been taught the methods by soldiers but sought assurances of immunity from prosecution before carrying them out.

Counsel for the chief constable and the British government has insisted, however, that a former British minister who alleged predecessors had authorised torture in Northern Ireland later corrected his assessment.

The claim made by Merlyn Rees in a newly discovered memo is central to the case.

In 1977 Mr Rees, then Home Secretary, sent a letter to Prime Minister James Callaghan setting out his views on procedures deployed against the men, the court heard.

In the memo he states it was his view that “the decision to use methods of torture in Northern Ireland in 1971/72 was taken by ministers - in particular Lord Carrington, then Secretary of State for Defence”.

The document, uncovered from the national archives in London, featured in an RTÉ documentary in 2014 and led to questions being raised at the Northern Ireland Policing Board.

But it was argued that within weeks Mr Rees’ assessment of the men’s treatment was modified to having faced deep interrogation.

It was stressed that in 1978 the European Court of Human Rights held the techniques constituted inhuman and degrading treatment - but fell short of torture.

Ruling on the appeal today, however, Lord Chief Justice Morgan and Lord Justice Stephens said: “We are satisfied that the treatment to which Mr McGuigan and Mr McKenna were subject would, if it occurred today, properly be characterised as torture bearing in mind that the Convention is a living instrument.”

During the case lawyers for the group claimed a review into the deep interrogation methods deployed against them had been too narrow.

The court also heard how Sinn Fein MLA Gerry Kelly had pressed the then chief constable at a Policing Board meeting in July 2014 on what action was being taken on assertions in official documents that Lord Carrington authorised the use of “methods of torture” in Northern Ireland.

He received a response that the PSNI will assess any allegation or emerging evidence of criminal behaviour with a view to substantiating it and identifying any evidence to justify a prosecution.

The two appeal judges held: “We are satisfied that the chief constable’s answer to the question posed by Mr Kelly at the meeting of the Policing Board gave rise to a legitimate expectation of the type described in the judgment.

“The chief constable has not resiled from that undertaking.”

They went on to state that an investigation carried out by a researcher on behalf of the now defunct Historical Enquiries Team “was irrational and did not honour the undertaking given by the chief constable”.

Acknowledging the passage of time may hamper to progress of any further probe, the judges accepted civil servants should protect the political reputation of ministers in a modern democracy.

But they cautioned: “There is a real danger that the rule of law is undermined if that extends to protecting ministers from investigation in respect of criminal offences possibly committed from them.”

Dissenting from his judicial colleagues, Sir Donnell Deeny held the decision by October 2014 not to investigate further was one the Chief Constable was lawfully entitled to make.

He also said: “It seems to me that the police have much more pressing duties of crime prevention and law enforcement than to conduct historical research into the matters of which the applicants complain”.

Outside court Mr McGuigan insisted: “Today’s judgment makes it expressly clear that the treatment that I suffered at the hands of ministers was torture and should be investigated by an independent police force.

“This treatment cannot be forgotten, it has had lasting and terrible effects on my mental health to this day, and I can only hope that this judgment will assist someone somewhere in the world that suffers torture at the hand of their Government.”