Drew Harris says Majella Moynihan case only one on record 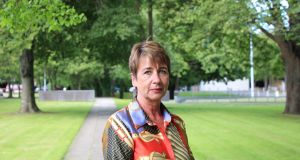 Majella Moynihan: disciplined by the Garda when she became pregnant by a male member of the force. Photograph: RTÉ

The Majella Moynihan case is the only example of disciplinary proceedings against a female Garda member who became pregnant while unmarried, Garda Commissioner Drew Harris has said.

Although a trawl of Garda records had found cases with similarities and some documents contained comments relating to “unmarried female (Garda) members becoming pregnant”, no other cases had been unearthed to date showing disciplinary action had been commenced, he told the joint Oireachtas Committee on Justice hearing on Wednesday.

Ms Moynihan was charged in the 1980s with breaching the Garda’s disciplinary rules for having premarital sex with another garda, becoming pregnant and having a child. She was then in her early 20s.

Having spoken publicly for the first time earlier this year about what she endured, she said she was pressured to give up her infant son for adoption at the time. Although she stayed in the Garda, she left after 15 years of service, saying others in the force “portrayed me as an easy woman”.

After she spoke out in June, she received an apology from the Garda Commissioner and the Department of Justice.

When the case emerged during the summer, Mr Harris said a trawl of records for other similar cases had been commenced. He added that that time that early indications suggested some cases with similar characteristics had emerged.

However, he has now said that Ms Moynihan’s case was the only one that had been identified to date in which disciplinary proceedings were commenced.

Mr Harris also spoke at the hearing about his plans to introduce a new operating model for the Garda. It would involve the number of Garda divisions being reduced from 28 to 19.

Each of the enlarged divisions would be run by chief superintendent with more civilians appointed to conduct non policing administrative duties, thus freeing up more Garda members for front line policing. More sergeants and inspectors were also being appointed across the country.

Mr Harris said the number of chief superintendents and superintendents posts would not be significantly reduced under the new plan, as many on policing and politics fear.

He added that with the uncertainty around Brexit, there was “already enough going on” in the Garda’s border divisions without asking the personnel there to undergo structural change under the new plan.

As a result, he had decided to pause the changes as they relate to the Border divisions until after the outcome of the Brexit process was clear.

Jim O’Callaghan TD, Fianna Fail’s spokesman on justice, told Mr Harris there was “concern” among elected representatives that Garda stations that were currently the headquarter station for their divisions would be “downgraded”.

He said there was concern the stations would lose that status as divisional headquarters when divisions were merged.

“Some stations may no longer have a chief superintendent, there will be eight less doing divisional policing,” Mr Harris replied.

Mr Harris added that in Garda stations across the country that would no longer be run by a superintendent, extra inspectors would be appointed. He also told the committee it was not yet decided which stations would become the divisional headquarters in the enlarged divisions.

Many elected representatives and Garda members believe that when it becomes clear which current divisional headquarter stations will no longer enjoy that status when divisions are enlarged, local opposition to the plans will crystalise.

However, Mr Harris has said that policing in the Republic was being hindered by the current structure of the force. He has said there are too many Garda members working desk jobs and that under his plans there would be far more frontline gardaí visible in all parts of the Republic with many more sergeants and inspectors also appointed to run and supervise policing.

Under his places, the chief superintendents in each of the 19 new enlarged divisions will have more autonomy to set policing plans for their areas and run policing in their areas. They would be supported by local teams of specialist investigators skilled at examining a range of serious crimes from drugs to fraud and sexual offences.

The national Garda units would be available to assist local gardaí in investigating serious crimes.

Mr Harris envisages all of the expertise to handle such offences will be available locally in all divisions for all but the most serious or complex crimes requiring assistance from national Dublin-based units. He also envisages community policing, during which members of the public would build relationships with their local gardaí, will be at the centre of his new plan.

The changes were unveiled by Mr Harris in recent weeks and many have been recommended by the Garda Inspectorate in recent years and by the Commission on the Future of Policing in Ireland, which reported 12 months ago.