Police feared Kevin Lunney would be killed after recent threats 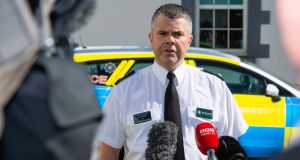 Members of the group who abducted and attacked a senior Quinn Industrial Holdings executive on Tuesday lay in wait for him in a vehicle close to his home while others followed him in a second car, The Irish Times has learned.

Security sources said Kevin Lunney’s car was rammed by the waiting group as he turned into the country lane leading to his home in Kinawley, Co Fermanagh, on Tuesday evening as he made his way home from work.

He was then trapped in his car as his path was blocked in front by the vehicle that rammed him while the following car turned into the lane to stop him reversing away from the spot, about 500m from his home.

Mr Lunney locked himself in his car but four masked attackers broke his windows and dragged him out, burning the car out and abducting him from the scene. The Garda and PSNI believe the attack was planned weeks in advance and began when the vehicles used were stolen for the purpose.

Police and gardaí rushed to the homes of other Quinn Industrial Holdings executives on learning of Mr Lunney’s abduction as they feared his colleagues could also be targeted.

Sources said there was significant panic among law enforcement on both sides of the Border, as it was feared Mr Lunney had been taken away to be killed in light of recent threats that a “permanent solution” would be found for some Quinn executives.

Executives at the company have been subjected to a five-year campaign of violence and threats, and have been advised by gardaí to install panic rooms in their homes. The executives have also been advised not to stop their cars for any person or any reason on the roads, such is the level of threat against them.

Even before the continuing campaign against the company began in January 2015, other companies buying former Quinn Group assets were also attacked.

Sources familiar with the campaign of violence and intimidation against Quinn Industrial Holdings directors and assets believe there had been more than 70 such incidents since the start of 2015. Some have taken the form of online harassment via social media accounts and websites apparently established for that purpose.

Gardaí and the PSNI believe the violence has been carried out by experienced criminals, whose modus operandi suggests paramilitary experience. The police forces believe those responsible are unhappy that Seán Quinn – who has condemned the violence – is no longer running the businesses and deeply resent those who have assumed the main management roles and were formerly a young executive team that worked for Mr Quinn.

A rally in support of Mr Lunney, who has worked in what was the wider Quinn Group since 1996, is planned for Friday at 3pm in the company’s premises at Derrylin, Co Fermanagh.