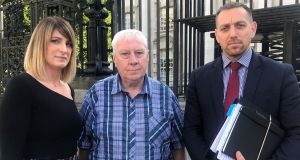 The brother of an internee shot dead in 1974 as he attempted to escape from the Long Kesh prison camp in Co Down has welcomed the first step towards a fresh inquest.

The case of Hugh Gerard Coney (24), from Coalisland, Co Tyrone, was one of six mentioned at Belfast Coroner’s Court on Thursday.

The cases, including that of two men shot dead in a loyalist feud in 2000, are among dozens that are the subject of a series of preliminary hearings over three weeks.

Presiding coroner Judge Siobhan Keegan will determine in which order the outstanding legacy inquests should be heard following the ongoing preliminary hearings.

On Thursday, she heard that a fresh inquest into the death of Mr Coney is likely to take about two weeks to be heard.

Ms Justice Keegan said: “I have looked at a lot of cases this week, I am taking a little break and coming back next week and the week after, and thereafter [will] make a decision and let you all know where this case stands.”

Speaking outside court, Mr Coney’s brother Jim welcomed the brief airing of the case, and said his family simply wanted truth and justice.

“We want justice, and the truth, that’s all we really want, why was he murdered running away over a field,” he said.

“He could have been arrested, he wasn’t armed, he was interned. He had dug a tunnel and was running away along with a number of others when he was shot.”

These included the killings of John Coulter and Robert Mahood, who were shot dead in north Belfast in August 2000 during a feud between loyalist paramilitary groups the UDA/Ulster Freedom Fighters and the Ulster Volunteer Force (UVF) – as well as the shooting by the UVF of former loyalist prisoner Robert Moffett on the Shankill Road in May 2010.

Ms Justice Keegan heard that those three murders are currently the subject of a Police Ombudsman for Northern Ireland (PONI) investigation, which is likely to take another 18 months to complete.

Updates were also heard on the killings of Leo Anthony Norney by soldiers in west Belfast in September 1975, RUC sergeant Joseph Campbell by loyalists in Cushendall, Co Antrim, in February 1977, and republican Sam Marshall, who was killed by loyalists in Lurgan, Co Armagh, in March 1990.

The latter two cases are currently part of two major investigations by PONI.

The death of Mr Campbell is being looked at as part of Operation Newham, which is investigating the activities of the UVF in the mid-Ulster area, including allegations of collusion, in the 1970s.

Counsel for the Ombudsman’s office estimated this investigation would take at least 18 months to complete.

Meanwhile, the death of Mr Marshall is included as part of PONI’s Operation Ashton, which is investigating the activities of the UVF in mid-Ulster in the 1980s and 1990s.

The series of preliminary inquest hearings will continue to October 4th. - PA