Kevin Lunney was slashed, beaten and had bleach poured on him by kidnappers

QIH chief operations officer believed to have been held in a horsebox, investigators believe 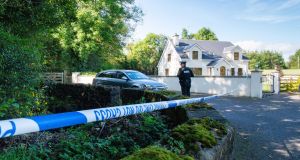 Kevin Lunney, the Quinn Industrial Holdings chief operations officer kidnapped and imprisoned on Tuesday night, was slashed about the face and neck with a Stanley-type knife and had one of his legs broken in two places below the knee, it has emerged.

According to sources familiar with the dual Police Service of Northern Ireland and Garda Síochána investigations into the kidnapping and beating, Mr Lunney was held in the Republic in a horse box, or similarly movable vehicle, while he was being beaten. He was hooded throughout.

The savage and depraved nature of the beating, believed to have been carried out by hired attackers, was made worse when the perpetrators poured industrial bleach over Mr Lunney and his wounds in an apparent effort to destroy any of their own DNA that might have attached itself to him.

The attackers, four of whom were involved directly in the kidnapping but are believed to have been part of a larger gang, numbering perhaps 10 or 12 people, abducted Mr Lunney from outside his home at Kinawley in Co Fermanagh at around 6.40pm and brought him to Co Cavan, crossing the Border at or near Swanlinbar.

Mr Lunney was hit about the torso and face and sustained bruising to his cheekbone and temple area. It is understood that his leg was broken in two places, not through any mishap in the kidnapping but because of a sustained beating administered to him with a metal bar or a wooden post.

As Mr Lunney was set upon in the confined space where he was held, his attackers shouted at him. Sources have not disclosed what was said to him.

He was slashed on the side of his neck, below his ear and around the area of a carotid artery. Had it been punctured, Mr Lunney would almost certainly have died.

As it was, he was taken from the site of the beating, which may have lasted less than 30 minutes, and driven to a crossroads near Cornafean where he was dumped only to be found around 9pm.

“This was a savage, premeditated and well-organised attack and beating,” said a source. “There has been a campaign [of intimidation against Quinn Industrial Holdings executives] since 2011 but this is the first occasion where it is very clear that [the attack] was co-ordinated deliberately to damage, to hurt, an individual.

“This was organised and paid for, and deliberately set up to ensure hurt, maximum hurt.”

The source said it was “beyond comprehension” what Mr Lunney had been put through.

Mr Lunney was dumped at a small crossroads near Cornafean, about 12km west of Cavan town, where he was found by a young tractor driver working for a local contractor. The young man and his mother comforted Mr Lunney, who asked that his wife be told he was alive, while waiting for an ambulance and gardaí to arrive.

Taoiseach Leo Varadkar said he was horrified by the attack.

“I condemn it absolutely. It was a very cowardly and brutal act.”

Speaking at the National Ploughing Championships in Co Carlow, he said the Quinn companies were very important on both sides of the Border, and that considerable Garda resources would be devoted to the incident.