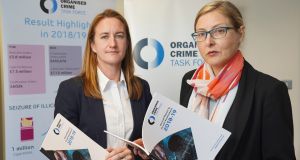 DS Rachel Shields of the PSNI and Claire Archbold of the Department of Justice at the launch of the Organised Crime Task Force annual report. Photograph: Aaron McCracken

There is a “heightened risk” that organised crime will expand into new sectors and fuel further criminality after Brexit, the North’s Organised Crime Task Force has warned.

In its annual report, which is published this morning, the body warns of a “wider risk to the culture of lawfulness” in a no-deal scenario. It said any changes to the terms of trade were likely to lead to an increase in cross-Border smuggling, tariff evasion and VAT fraud by organised criminals.

A no-deal Brexit, it said, “will lead to changes in criminal behaviours, with potential new criminal markets for previously legitimate commodities”, such as the agri-food sector.

It also warned that organised crime groups would seek to undercut legitimate businesses, and that there may also be an increased level of non-compliance.

Writing in the foreword to the report, the permanent secretary of the North’s Department of Justice, Peter May, warned the successful combating of organised crime required strong international co-operation, and that some aspects of that co-operation were “specifically enabled by EU membership”.

“It will be important,” he wrote, “whether the UK leaves with or without a deal, to find ways which either replicate these measures or to put in place replacement approaches which minimise the impact on operational efficiency, speed and cost.”

The task force is made up of a number of agencies, including the Department of Justice, the Police Service of Northern Ireland, An Garda Síochána, the UK Border Force and Revenue & Customs.

It produces a report each year that outlines its operations against organised crime in Northern Ireland and provides an assessment of current threat levels.

One million cigarettes, 9.2kg of Class A drugs and 92 offensive weapons were prevented from entering Northern Ireland.

The report also revealed that “rip-out attacks” on ATM machines in Northern Ireland, in which stolen diggers were used to tear entire ATMs from the walls of buildings, had been ended by the arrests of members of an organised crime group.

According to the report, 14 such thefts took place between late 2018 and April 2019 in two areas, Ballymena/Antrim and the Tyrone border.

“More than one organised crime group was believed to have been involved in these attacks, with offenders being extremely well organised and with a high level of proficiency and expertise in the use of plant machinery, specifically diggers.

“In some cases the theft took only a matter of minutes to complete, meaning, in terms of the time spent at the scene and the risk of being detected, these crimes were relatively low risk compared to the large-scale profits made and amount of money stolen in most cases.”

No further incidents have been reported since the arrests, but the PSNI said it “remained alert to the possibility that such criminal activities could resume”.

The report also found that criminal activity facilitated by technology was continuing to expand “rapidly”, and cyber-related fraud was a major growth area.

The number of scam-type frauds, which used modern technology as well as traditional methods, also increased.