Minister says there have been arrests, there are files with the DPP over attacks 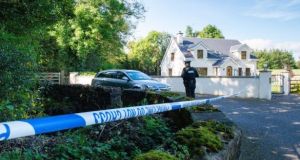 The Minister for Justice has appealed for anyone with information on the attack on Kevin Lunney, a senior executive at Quinn Industrial Holdings, to contact the gardaí in confidence.

Mr Lunney was kidnapped on Tuesday on a roadway in Co Fermanagh as he drove home from work. He was then subjected to a two-hour ordeal, during which he was viciously beaten by a group of masked and armed men.

The dozen-strong gang had prepared a horsebox as a mobile torture chamber before the attack.

Some of the 50-year-old’s fingernails were pulled out during the assault, his face and neck were slashed with a Stanley knife and his right leg was badly broken twice below the knee.

His injuries have been described as “life-changing” by gardaí, who said the father of six was beaten “within an inch of his life” before being dumped on a Co Cavan road some 35km from his home.

Police believe the attackers have carried out similar assaults before, given that they took care not to leave behind incriminating DNA evidence by pouring industrial-strength bleach over the businessman’s wounds.

Charlie Flanagan told Newstalk Breakfast on Friday morning there were are active files with the DPP in relation to other incidents involving Quinn group staff.

“There have been arrests, there are active files with the DPP. Every effort will be made by the PSNI and the Garda Síochána and I am confident that this will be brought to an end,” Mr Flanagan said.

Mr Flanagan said he had been informed by Garda Commissioner Drew Harris that all reports of criminal damage against the Quinn group are being investigated.

“The investigation is ongoing. The perpetrators will be brought to justice.”

A senior Garda team is in the Cavan area working in partnership with the PSNI, he added. “The working relationship between the PSNI and the gardaí has never been as good. That’s important for the sharing of information.”

The Minister said there were 75,000 exchanges of information between the two forces in the last year.

Mr Flanagan repeated his condemnation of the attack on Kevin Lunney, describing it as “depraved.”

Sources said there was significant concern among law enforcement on both sides of the Border as it had been feared Mr Lunney had been taken away to be murdered, in light of recent threats that a “permanent solution” would be found for some QIH executives.

Informed sources said gardaí had advised on the installation of panic rooms, which are designed to be invulnerable to attack or intrusion. Officers were also sent to the homes of the other QIH executives on Tuesday night immediately after Mr Lunney’s abduction to ensure that they were safe.

“We need to ensure that no stone is left unturned in the investigation,” Mr Flanagan said.

Mr Flanagan said he understood people in the Cavan/Fermanagh area were afraid of reprisals, but he urged anyone with information to contact the confidential Garda hotline - 1800 666 111.

A rally in support of Mr Lunney, who has worked with what was the wider Quinn Group since 1996, is planned for 3pm on Friday at QIH’s premises in Derrylin, Co Fermanagh.