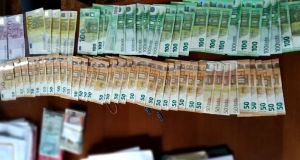 Some of the banknotes seized in the Europol operation. Image: Europol/Facebook

Gardaí, the PSNI and the Lithuanian police have unearthed a significant heroin-smuggling and people-trafficking criminal network which has exploited drug addicts and other vulnerable people.

A total of 18 suspects have been arrested, with five detained during searches in four counties in the Republic on Wednesday, according to Garda sources.

The arrests in Ireland were made in Dublin, Kerry, Cork and Waterford, with the operation in the Republic involving the Garda Drugs and Organised Crime Bureau, along with locally based gardaí and armed support from specialist units. The four suspects arrested in the Republic, four males and one female, were all Lithuanians.

Garda sources said the locations of the arrests underlined the national reach of the Lithuanian drugs network in the Republic, which has been trafficking people and smuggling drugs into the jurisdiction for a number of years.

Once the Lithuanian gang trafficked the drug users or other vulnerable people into the Republic and North, while carrying heroin, they then exploited them and effectively used them as the foot soldiers in a complex drugs sales and distribution network across the island of Ireland.

Of the 65 trafficking victims who were exploited into working for the gang in Ireland, some were drug addicted and others were from vulnerable social backgrounds.

The activities of the gang emerged three years ago and since then Eurojust has been helping to co-ordinate the policing operation between the Garda, PSNI and Lithuanian authorities. A major day of action involving all three police forces took place on Wednesday when the 18 arrests were made across the three countries.

During the operation firearms were found in Lithuania, while the three police forces also seized cash, including large amounts of €100, €200 and €500 notes. Vacuum packed parcels of €50 notes were also found sealed into vases while expensive jewellery was also seized.

The arrest of the three suspects brings to 54 the number of people linked to the same Lithuanian gang arrested by the PSNI in recent years.

Eurojust co-ordinated live and ongoing communication between the three police forces throughout Wednesday. It meant evidence uncovered in one jurisdiction could be immediately relayed to police search teams in the other countries to inform their operation while it was underway.

The Criminal Assets Bureau (CAB) was also involved in a major assets seizure investigation which was seeking to find and confiscate cash and other assets, including property and luxury vehicles, amassed in Lithuania, the Republic and the North.

The head of Europol’s serious organised crime centre, Jari Liukku, described the outcome of Wednesday’s operation as “fantastic results” that had emerged after a significant investigation targeting “criminals who are causing harm” in local communities.

“I hope people are reassured by this robust and co-ordinated approach which sends a loud and clear message to those involved in the supply of class A drugs: we will pursue you tirelessly and relentlessly,” he said.