Coronavirus: Two more deaths and 156 further cases in the State 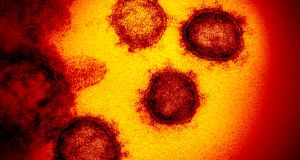 The woman was tested for Covid-19 after six days in custody. Photograph: NIAID-RML via AP

Two more people have died of Covid-19 in the Republic, and a further 156 confirmed cases have been recorded, the Department of Health said on Saturday.

Earlier on Saturday it was confirmed that a female prisoner aged in her 20s has tested positive for Covid-19.

It is understood the woman (23), who is the first prisoner to test positive for the coronavirus, has been in quarantine since she was taken into custody on August 13th.

The woman was tested after six days in custody which is current protocol for new committals. She is understood to have had symptoms prior to going into custody.

Of the cases notified by the department on Saturday, 81 are men and 75 are women. Some 71 per cent are under 45 years of age.

Dr Ronan Glynn, acting chief medical officer at the department of Health said: “This weekend, if you are having people over, please have no more than six visitors, from no more than three households, to your home.

“It is vital that people all across the country follow the public health advice. If you have any symptoms, isolate and contact your GP by phone immediately.”

The county breakdown is 55 in Dublin, 36 in Kildare, 12 in Tipperary, nine in Limerick, seven in Kilkenny, six in Waterford and the remaining 31 cases in Carlow, Clare, Cork, Donegal, Galway, Kerry, Laois, Louth, Meath, Monaghan, Offaly, Roscommon, Westmeath, Wexford and Wicklow.

The passenger locator form, required by anyone arriving in Ireland from overseas, will be available for completion online from Wednesday, August 26th, according to the Department of Health.

Minister for Health Stephen Donnelly said: “Completion of this form helps our public health officials carry out follow-up checks on those arriving into the State. It also facilitates contact-tracing efforts in the event of a suspected or confirmed case of Covid-19 on a flight or ship that has landed in Ireland.”

Completing this form is a legal requirement, and will be available at gov.ie/locatorform from next Wednesday.

A spokesperson for the Department of Health said that the Government continues to advise against non-essential travel.

Passengers arriving into Ireland from countries not on the green list – for which only normal travel precautions apply – willl also be asked to restrict their movement for 14 days.

Passengers who complete the form online will receive an email receipt, and public health messages will also be sent to them by text after they arrive in Ireland, according to the spokesperson from the Department of Health.

Those travelling immediately onwards to Northern Ireland will not be asked to complete all sections of the form.

In Northern Ireland, another 71 people have tested positive for coronavirus, bringing the total to 6,647, the North’s department of health said on Saturday afternoon.