Decision not to use Special Criminal Court met with surprise 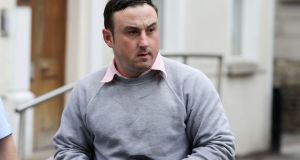 The decision to prosecute Aaron Brady before a jury was met with surprise by legal observers due to the nature of the crime and Brady’s connections to paramilitaries and organised criminals. Photograph: Collins

The Director of Public Prosecutions declined to use the non-jury Special Criminal Court to prosecute Aaron Brady for the murder of Detective Garda Adrian Donohoe, despite the recommendations of the investigating gardaí.

The decision to prosecute Brady before a jury was met with surprise by legal observers at the time due to the nature of the crime and Brady’s connections to paramilitaries and organised criminals.

Brady was convicted last week of the capital murder of Det Gda Donohoe during an armed robbery at Lordship Credit Union in Co Louth on January 25th, 2013. He faces a minimum term of 40 years.

The lead investigator into the case, now retired Detective Inspector Pat Marry, told The Irish Times he was in favour of the trial taking place before the non-jury court.

“I made the application for it to go before the Special. I spoke with the DPP and they were more in favour of doing it in front of the jury. And that’s what they decided and it was as simple as that.”

Opposition to the Special Criminal Court is a core tenet of most strands of republicanism. However, this changed somewhat earlier this year when, for the first time, Sinn Féin TDs did not oppose the renewal of emergency legislation related to the court.

The non-jury Special Criminal Court is used in cases where the DPP fears a jury could come under intimidation or undue influence. It is typically used in cases involving organised crime or subversive offences.

In the case of Brady, the DPP took the view the ordinary courts were adequately equipped to handle allegations of intimidation.

Having used the non-jury court effectively to successfully prosecute several high-profile cases related to the Hutch-Kinahan feud, there is some evidence the DPP is becoming more reluctant to refer cases there.

Last year, Thomas Bates of Abbey Street in Cahir was tried and convicted before a Tipperary jury for conspiring to possess a gun, explosives and firearms. At his appeal last July Mr Justice George Bermingham expressed surprise the case did not take place before the non-jury court.

It is understood a trial due to start next year involving alleged serious organised criminals will also proceed in the ordinary courts.

Attempted intimidation of witnesses was a significant factor during the Brady trial. The prosecution said it was aware of “very serious” but unsuccessful attempts to intimidate its key witness.

On another occasion a video of a witness making a statement to gardaí implicating Brady was shared widely on social media, accompanied by text calling him a “rat” and a “tout”.

The trial judge, Mr Justice Michael White,  described it as “the most outrageous contempt of court” he had ever seen.

What is certain is the seven-month trial would have finished much sooner if it was held in the non-jury court. Much of the delay related to legal argument which had to take place in the absence of the jury and the need to ensure social distancing for the 12 jurors due to the coronavirus pandemic.