Policing Authority head concerned about comments made to vulnerable tenants 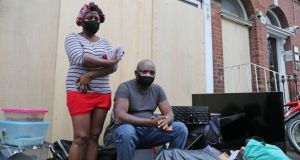 Theresa Chimamkpam and Elias Jegede with their belongings after being evicted from Berkeley Road, Dublin, on Wednesday. Photograph: Nick Bradshaw

An Garda Síochána’s involvement in an eviction at a house in Dublin last week suggests the organisation has failed to learn lessons from previous similar events, the head of the Policing Authority has said.

Bob Collins was reacting to the removal of nine tenants from a house on Berkeley Road in Phibsborough on Wednesday by several men dressed all in black who wore face coverings, caps and sunglasses.

Video footage shows a number of gardaí were present and watched as one of the tenants was physically removed from the property. The tenants spent several hours afterwards outside the house with their belongings. They later regained entry and found the property had been extensively damaged.

The Garda has opened a criminal damage investigation following the incident and on Saturday said a review of the force’s involvement in the incident would be conducted.

Mr Collins, speaking on RTÉ Radio 1’s This Week programme on Sunday, said the authority’s “primary concern” was that the presence of gardaí at the house could give the impression members were involved in the removal of the tenants. This was despite the fact that gardaí were responding to a call from the tenants about people breaking into their home at the time.

Footage from the incident shows one garda tell a distressed tenant “I’ve told you already, it’s not my responsibility if you’re homeless” and “you have no right any more to be here”.

Mr Collins said things appeared to have been said that were “inappropriate”. He said people who were being evicted were typically in a difficult position and the Garda’s approach to vulnerable or victimised people, which was evident during the Covid-19 pandemic, “appears not to have been in evidence here”.

The presence of gardaí on the premises “doesn’t immediately suggest” they were there in the interests of the residents, he said.

Mr Collins said his concerns relate less to the individual gardaí involved and more to the the organisation’s capacity to learn from the incident.

There have been several other incidents in recent years where Garda involvement in evictions has caused significant controversy, including the presence of masked gardaí at an eviction on North Frederick Street, Dublin, in 2018.

Lessons should have been learned from similar events in the past, Mr Collins said, but it appeared they had not been “internalised so that they are reflected in the day-to-day activities of gardaí”.

Mr Collins welcomed news of a review of the matter by an outside superintendent. He said the report would be made available to the authority and that as much of it as possible should be made public.

In a statement on Saturday, the Garda said it was “very aware of current public discourse” around the eviction and that as an organisation gardaí must “listen and learn from our experiences”. It said the force was “committed to delivering a professional policing and security service with trust, confidence and support”.

Deputy Garda Commissioner John Twomey said that where An Garda Síochána “can learn from this experience, we will do so as to ensure that we continue to provide the best policing service going forward based on our tradition of policing by consent”.