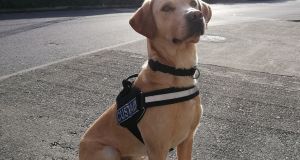 Revenue’s drug detection dog Bailey sniffed out cannabis worth more than €34,000 at the Dublin mail centre on Friday, after the drugs had been put in packages labelled as Star Wars Lego and other toys.

Officials said the seizure of 1.7kg worth of herbal cannabis was as a result of routine operations at the facility.

The drugs were discovered in four separate parcels which came from Canada and the US.

The packages were declared as a Lego Star Wars X-Wing, a Fortnite Nerf gun, a book, and a Marvel backpack, respectively. Each of the items was on its way to addresses in Dublin and Kildare.

It followed another success story on Wednesday, when Revenue dog Kelly uncovered almost 50,000 cigarettes at Dublin Port, as well as 2.6kg of tobacco.

In June, sniffer dog Robbie played a part in the biggest drug seizure of the year, at Dublin Port, where €6.2 million worth of cocaine and herbal cannabis was found concealed in hot water cylinders.