Garda is one of smallest per capita police forces in EU 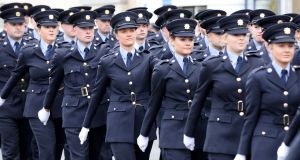 In 2016, 21.1 per cent of police officers in the EU were women. Photograph: Eamonn Farrell/RollingNews.ie

The Republic has one of the smallest per capita police forces in Europe according to a new report by the European Commission.

The report, published by Eurostat on Friday, shows the State employs 278 gardaí per 100,000 citizens, which is 40 less than the EU average.

The member state with the largest per capita police force is Cyprus where there are 573 officers per 100,000 people, while the smallest is Hungary where there are just 90.

Northern Ireland appears significantly higher up the list than the Republic with 382 PSNI officers per 100,000 inhabitants. In terms of the rest of the UK, England and Wales have 212 officers while Scotland has 322.

The Government provided €60 million in Budget 2019 for Garda reform next year, some of which will be used for the recruitment of an additional 800 members to the force.

More promotions in the Garda were also being provided for, with 110 extra sergeants and 81 additional inspectors to be put in place next year.

In recent years, the number of police officers in the EU has slowly been decreasing. In 2016, the EU had a total of 1.6 million police officers, a reduction of 3.4 per cent since 2009.

Hungary, Finland and Denmark had up to 200 police officers per 100 000 people, while in Slovenia, Slovakia, Portugal, Italy, Latvia, Croatia, Greece, Malta and Cyprus there were 400 or more.

The report noted that member states organise their law enforcement differently, “according to national needs, resources and priorities”.

“Another difference between national figures is who exactly counts as police,” it said.

“For example, some special police units may be counted in different ways. The standard definition of police officers does not include clerks, maintenance staff and other employees who are not directly involved in typical police work.”