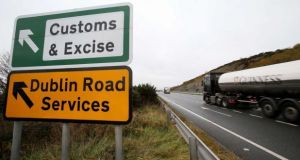 Concerns have been raised about the possibility of civil disorder arising from new Border arrangements under a no-deal Brexit. Photograph: Paul Faith/AFP/Getty Images

Almost 1,000 police officers from England and Scotland are to begin training for deployment in Northern Ireland in case of disorder from a no-deal Brexit, according to a report in The Guardian.

The move comes after Police Service of Northern Ireland (PSNI) chiefs asked for reinforcements to deal with any trouble that arises from a hard border. The training for officers from English forces and Police Scotland is expected to begin this month.

The PSNI confirmed to The Irish Times on Thursday evening that it was “working closely with other UK policing partners in our Brexit planning processes” although it did not specify how many additional officers might be required under the “mutual aid” arrangements.

The last time the PSNI sought and received assistance from additional British police officers was during the G8 summit of world leaders in Co Fermanagh in 2013.

PSNI Chief Supt Simon Walls said that “mutual aid would only be sought if absolutely necessary”. He said that “sensible precautionary preparations” for Brexit formed part of the force’s “ongoing planning work”.

“Such precautionary planning around mutual aid is something that happens every year across UK policing and if it were actually required its provision to police services would be managed by the (British) National Police Co-ordination Centre,” added Chief Supt Walls.

Last month it was announced that the the PSNI has been allocated additional special funding of £16.5 million so that it can recruit an additional 308 officers and staff to cope with the demands of Brexit.

The additional staff are to be recruited over the 16 months. The funding followed on requests made by the chief constable George Hamilton. He said the money would be used to invest in estate, IT and infrastructure as well as staff.

Demands for reinforcements for Northern Ireland in the event of no deal come as forces with major ports in their jurisdiction prepare for chaos, especially at Dover in Kent.

Plans for a national mobilisation of police, which were devised after the 2011 riots across England, are being revised and adapted for the tensions thrown up by a no-deal Brexit.

The size of PSNI’s request for reinforcements from the rest of the UK because of Brexit is roughly double those it has made in recent years for Northern Ireland’s marching season. - Additional reporting Guardian