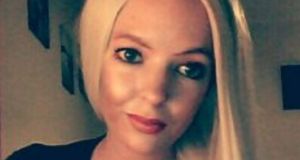 Investigators in Donegal were last night trying to establish if a young woman was murdered before or during an armed stand-off between her suspected killer and gardaí.

Jasmine McMonagle (27), an aspiring actress and model, was found dead in her home at Forest Park in Killygordon by an armed response unit over 2½ hours after calling gardaí to report a domestic disturbance.

Local gardaí received the call from the distressed woman at 4.20am on Friday and arrived 27 minutes later.

There they were confronted by a man wielding a knife who slashed at one of the gardaí, cutting the garda’s uniform and forcing them to withdraw.

At this stage gardaí did not know what condition Ms McMonagle was in. They were aware her two young children were also in the house and it was decided to treat the incident as a hostage or “barricade” situation.

The Armed Support Unit (ASU) was despatched from Ballyshannon, about 45 minutes’ drive away.

On arrival, the ASU established an operational commander at the scene, set up a cordon and began the process of negotiating with the man inside the house.

The Garda said last night these factors were the main reason so much time elapsed between the initial call-out and the conclusion of the incident.

At about 7.30am a decision was made to enter the premises and end the siege. Armed gardaí arrested the man and found Ms McMonagle’s body.

Attempts to revive her were unsuccessful. The children were taken unharmed from the house and are with relatives.

Gardaí had been called to the house on at least one previous occasion, it is understood.

The suspect, who is aged in his 20s, is currently being questioned in Letterkenny Garda Station. He has been seen by a psychiatrist.

It is hoped a postmortem will shed light on when exactly Ms McMonagle died. Investigators are still unsure if she was already dead by the time gardaí first arrived or if she was killed sometime during the siege.