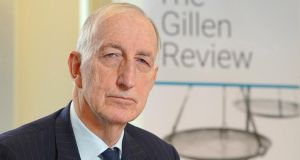 Sir John Gillen spent 29 years as a barrister and 18 years as a senior judge in Northern Ireland and over that long period was involved in many rape cases, both from the bench and as a prosecution and defence lawyer.

Last year, in the wake of the nine-week trial in Belfast which saw Ireland and Ulster rugby players Paddy Jackson and Stuart Olding cleared of rape, he was handed the challenge of reviewing how serious sexual crime cases are dealt with in the North.

He says personal lengthy interviews with mostly women, but also with some men, who told him of their experiences of rape and other serious sexual crime, hugely enhanced his knowledge of the situation.

“The most harrowing experience of my entire career spanning the bar and the bench was speaking to these complainants. I found their calm stoicism had a profound effect on me,” he says.

“I got an insight into them that I never had before,” he says.

One of the most upsetting things, he adds, was that so many victims bought into ‘rape myths’.

He is trenchant in disabusing them of such notions. Of rape he said: “It is not about sex. It is about power, it is about humiliation.”

The trial of Jackson and Olding, and of two other men who were acquitted of lesser charges, gripped and in some instances convulsed the country. While the men were acquitted in March the nature of the trial, and its disclosures, not least the texts by Jackson and Olding boasting about their sexual encounter with the Belfast student who made the allegation of rape, triggered protests and a wider feeling of outrage and revulsion.

Jackson and Olding were free men but the trial spelled the end of their Ireland and rugby careers, with both players now playing in France.

It was against this febrile background last April that Gillen, a recently retired court of appeal judge, was tasked to review how the law deals with serious sexual offences. He is supported by a review team and an expert advisory panel.

In November, he published his 488-page preliminary findings which can be encapsulated in his firm view that the law needs a major overhaul – a message he repeated when recently speaking at outreach meetings on his review in Derry and Dungannon, Co Tyrone.

He is a tall man, a Belfast native, a former student of Methody College in the city and an Oxford graduate.

It is evident that over the past eight months he has got a firm grip on his subject. He has outlined the problems and devised solutions, as he prepares for his completed independent report to be written and submitted to the North’s department of justice at the end of February.

During the interview with The Irish Times, Gillen concentrates on the general problem as opposed to focusing specifically on the trial that gave rise to his review. But noting how the name of the woman was published on social media and how a picture of a woman purporting to be her was also published – even though it was someone else – he has a word of warning for the likes of Facebook and Twitter.

Social media companies generally argue that they are platforms as opposed to publishers and therefore not legally liable for what appears on their sites. Gillen wants a change to the law.

“We have got to reach a stage where these platforms are turned into publishers. If somebody writes into The Irish Times saying what a rat I am and you publish it there is no point your saying: ‘This is his view, not mine.’ I sue you, The Irish Times. This does not happen at the moment, and it has got to change.”

Addressing how some of the social media commentary flouted well-recognised sub judice rules, he added: “Jurors are reading and hearing totally inadmissible stuff. There is a real danger that social media pollutes the stream of justice.”

The man responsible for disclosing the woman’s name only had to pay a £300 fine. Gillen is clear that in future such people should face the risk of prison. “We have got to have heavy sentences for those who breach this,” he said.

And while the juror who posted comments about the rape case avoided prosecution, Gillen added that there should be “specific offences” relating to such actions.

Delay, under-reporting and complainants withdrawing from cases are major difficulties in relation to sexual offences in Northern Ireland. Gillen complains of a “colossal delay” between cases being reported to the police and trial. For rape, the figure is 943 days and for child sex abuse cases it is 980 days, which is “twice as long as in England and Wales”, he says.

“That is bad enough but it is getting worse each year. That is one of the reasons why so many people drop out [from cases]. It is just too long. You waken up every day and it is still there, it is just endless.”

In 2017-2018 just over 1,000 alleged rapes were reported to the PSNI which – based on the reporting figures – would mean that about 5,000 victims in Northern Ireland did not go to the police.

“What is nearly as bad is that of those who do go to the police over 40 per cent drop out,” he says.

“The moment you walk in the door saying ‘I have been raped’ to the end of the case there is less than a 6 per cent conviction rate.”

This would equate to about 60 convictions a year out of an estimated 6,000 rapes in Northern Ireland each year.

Under-reporting and drop-out by victims happens for a range of reasons, Gillen says.

Gillen says “excessive delay” could be tackled through strict case management where from the outset there was early liaison between the Public Prosecution Service and the PSNI, and between the prosecution and defence to sort out matters of disclosure and other issues.

He proposes that when cases get to trial that juries at the outset should be shown videos to rid them of any “rape myths” to which they may subscribe. In addition to the ones mentioned above they include questions over why the victim did not fight back or scream and the “belief that ‘real rapes’ are carried out by strangers who attack you in dark alleyways whereas 90 per cent of offences are committed by acquaintances, people that you know or have met”.

Gillen says publicly-funded campaigns about sexual crime – that also would go into schools – are required to educate people about rape myths and the issue of consent.

He says that as part of the consultation there were some calls, particularly from younger people, for an end to juries in rape cases; that decisions should be left to a single judge or a judge working with two lay judges. He says while he would consider this proposal his “experience of jurors is that they are extremely responsible provided they are given the right understanding and the right directions in clear, simple, non-legalese terms”.

“I still believe that our system of justice, North and South, where we have 12 good men and women coming fresh to the case with their knowledge of the world and their experience of people, is a better source of justice than battle-hardened judges who have seen it all before.”

The former judge declines to directly comment on the recent Cork case where the defence cited the thong the complainant was wearing as a matter the jury should consider. He says, however, “how women dress is one of most dangerous myths about” and that in advance there must be clarity about questions that lawyers could or could not raise during the trial. He was unambiguous that he would not permit such a matter to be put to a jury.

“I believe no public funds, North or South, should be given to barristers or solicitors to participate in these cases either as defence or prosecution until they have been though an approved training programme,” he says.

Lawyers and judges, he adds, should receive training from “people at the coal face” such as psychiatrists and psychologists and from experts from the likes of Women’s Aid and rape crisis centres.

He proposes a “new radical non-adversarial approach to cross-examination initially for children and vulnerable adults, extending the definition of vulnerable to include all serious sexual victims”. This would involve introducing “pre-recorded cross-examination long before trial and away from the court setting”.

He stresses that his proposals were not a “complainants’ charter”. “Don’t get me wrong, I still believe every accused has the right to cross-examine through counsel his accuser,” he said.

And while his preliminary recommendations were “moving a little more towards the inquisitorial than the adversarial” he still believes the “adversarial system” is the best way of achieving justice.

“However, you need to ameliorate it, particularly in cases of children and vulnerable witnesses.”

He is gratified that his proposal that the public, apart from close family members of the accused and complainant, be excluded from court appeared to have found general favour.

Probably his most controversial proposal was that, unlike in the Republic, the names of the accused should be published post-charge, although, he acknowledged, the issue required serious reflection.

“I met a large number of people who were acquitted and I am well aware of the profound and lasting effect that has on these people,” he says. “Some have had to leave Northern Ireland, some spoke of being vilified on the street. I met one person who contemplated suicide. Parents are devastated by the whole thing.”

But while he is still open to “persuasion or dissuasion” he feels the “greater contribution to justice” was naming the accused so that others who were assaulted might seek justice.

And it wasn’t just the big cases of Jimmy Savile, Rolf Harris and Max Clifford where a “raft of women came forward” with more allegations against them. The naming of the accused in less high-profile cases also prompted similar results.

“When you have people involved in really heinous offences – such as murder, manslaughter, not sexual but wicked child-abuse cases, cases of elderly people where they were tortured by robbers – why should they be named and people in rape cases not be? There has got to be an equality of the law in all this.”

It is quite a shake-up that Gillen is proposing in his – so far – 221 recommendations. They will require money and resources to implement. He refers to a study which estimated the cost of dealing with serious sexual crime “outside the partner setting” – where the victim was not in a relationship with their attacker – was £257 million for the period 2011-2012 in Northern Ireland. This was broken down in terms of health and social care costs, going through the criminal justice system, loss of earnings and “intangible human costs”.

“I firmly believe the fundamentals of the justice system in Ireland and the UK are the finest in the word. They are the envy of other nations, but in the area of serious sexual offences there is urgent and detailed repair required,” he says.

He ends with a warning: “We repeat what we do not repair.”