Harris: North Frederick St property should never have been cleared during rush hour 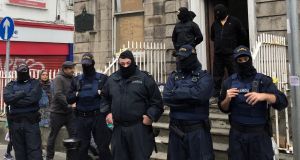 Policing Authority member Bob Collins said it appeared that private agents executing the court order to vacate the property at North Frederick Street were in the control of the event. Photograph: Jack Power

A property on North Frederick Street in Dublin’s north inner city should never have been cleared in evening rush hour last year, Garda Commissioner Drew Harris has told a meeting of the Policing Authority.

Mr Harris said An Garda Síochána has learned lessons from recent evictions and public disorder incidents and gardaí were now taking a more proactive approach in saying when and how a court order was executed.

Clashes ensued between the Garda and some protesters gathered outside the North Frederick Street property, all happening on a busy street for traffic and during midweek rush hour.

The timing of evictions was something gardaí in Dublin and other parts of the Republic were now taking more notice of, Commissioner Harris explained.

Gardaí were seeking to control when and how evictions would be carried out rather than allowing security companies and other third parties set the parameters.

The authority was meeting in Dublin on Wednesday with Commissioner Harris and his senior management team to discuss a Garda Inspectorate report about the Garda’s preparedness for policing major events and ones involving disorder.

The inspectorate was asked by the Policing Authority to carry out its review in the wake of two significant public order controversies.

Last September protesters from the Take Back the City group clashed with gardaí in North Frederick Street after masked men, executing a court order for the property owner, ordered the group to leave the building they were occupying.

Members of a Garda public order unit were called in to police the crowd that had gathered outside the building and wore their fire retardant hoods, or balaclavas, as clashes ensued with some of those gathered.

And in 2014 there was significant public disorder in Jobstown, west Dublin, when then tánaiste Joan Burton was surrounded in her car for several hours. People later put on trial for alleged false imprisonment were acquitted.

The Garda Inspectorate concluded while much work had been done to improve the Garda’s capacity to respond to public disorder in recent years, clearer policies, leadership and oversight were required.

It added the biggest risk associated with public disorder in Ireland was the Garda’s handling of it, rather than the disorder itself.

Commissioner Harris said he accepted the criticisms and an implementation plan had been drawn up for the inspectorate’s recommendations. While he was happy to act on the recommendations, he believed the planning and oversight of public order policing should be left to assistant commissioners in each region, rather than one assistant commissioner based in Dublin as the inspectorate had recommended.

Commissioner Harris said he believed senior officers who were based in the regions would be much more familiar with the challenges posed by policing disorder and events in their own areas than one officer based in Garda Headquarters, Dublin.

Policing Authority member Bob Collins said it appeared to him that the private agents executing the court order to vacate the property at North Frederick Street were in the control of the event rather than the gardaí called in to police any fall out.

Commissioner Harris accepted the planning of that eviction, or clearing of protesters occupying a vacant office building, was poor. He added gardaí were moving to ensure they were proactive in dictating planning, even though they had no role in carrying out an eviction.

On the issue of staffing, it has emerged 111 Garda members have been moved since the start of the year from desk jobs back to front line policing under the civilianisation process. A total of 500 posts are earmarked for civilisation this year.

Commissioner Harris said when he had decided to lower the number of new Garda members recruited this year from 800, as had been mooted, to 600, financial considerations were the centre of that.

However, because of gangland feuding and other policing challenges, including “resource intensive” murder investigations, the plan to stay within budget this year was now under pressure.

“We are still aiming for a break even position but it feels pretty tight, even at the six-month stage,” he said.