American couple robbed a day after wedding on Hill of Tara

Jeff Olsen appeals for return of ‘priceless’ footage of their ceremony 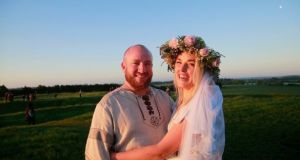 An American couple who wed last week during the summer solstice on the Hill of Tara are appealing to thieves to return their footage of the ceremony.

The videos and photos of Jeff Olsen and Anna Lisa Van Bloem’s special day were stolen from their photographer’s car boot, along with electrical items, passports and clothing, at the base of the hill last Saturday, just one day after they tied the knot.

While many of the items stolen were of significant value to the photographer- who is the bride’s brother, the wedding recordings are “priceless”, said Mr Olsen.

“We were so excited by our whole experience in Ireland. Our day was so magical,” said Mr Olsen.

“I actually said to my wife that it had all been too perfect, so maybe I jinxed the whole thing.”

The couple had been looking forward to showing the videos of their traditional Celtic hand-fasting service to their eight children- all from previous relationships - who were awaiting them back home in Utah.

“We were kind of distraught when we found out. Our whole ceremony was bound by our children, so it would be very special if the kids could see it,” Mr Olsen added.

The couple are offering a €500 reward for the return of the hard drive containing the footage of their union.

They will return on Friday to the US - where they are due to tie the knot legally - but Mr Olsen said the drive could be returned to Slane Garda Station, where Ms Van Bloem’s brother reported the incident.

He said his faith in Ireland had been restored by the kindness he and his partner had experienced in the aftermath of the robbery.

“Everyone has been really super. A lady sent us the photos she had taken of the day,” said Mr Olsen.

Since Mr Olsen spoke about the incident on RTÉ’s Liveline show on Tuesday afternoon, he had already managed to accumulate over 20 photos and three videos taken by strangers who were present on the hill during the ceremony.