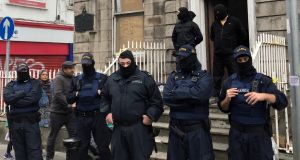 Gardaí at the scene of a public order incident outside a property on North Frederick Street in Dublin 1 last year. File photograph: Jack Power/The Irish Times

The biggest risk associated with significant public disorder in Ireland comes from the Garda’s policing of such incidents rather than the disorder itself, the Garda Inspectorate has said.

In a report on public order policing, the inspectorate concludes that existing policies were not implemented equally across the country. It said the chain of command and accountability were often unclear and confusing while organisational learning within the force was “ad hoc”.

“This is of particular concern to the authority in light of the extent of its engagement with the Garda Commissioner on this topic since July 2017,” Policing Authority chairwoman Josephine Feehily said in response to the inspectorate’s report.

Garda Commissioner Drew Harris is to appear before a public meeting of the Policing Authority in Dublin on Wednesday to respond to the findings.

The inspectorate produced its report – Public Order Policing: A Review of Practices in the Garda Síochána – at the request of the authority. It was sought last year against the backdrop of two public order policing controversies including the acquittal of anti-water charge protesters accused of falsely imprisoning then tánaiste Joan Burton TD in Jobstown in 2014.

More recently, protesters from the Take Back the City group clashed with gardaí in North Frederick Street in Dublin last September after masked men ordered the group to leave the building they were occupying on foot of a court order. Members of a Garda public order unit were called in to police the crowd that had gathered outside the building and wore their fire retardant hoods, or balaclavas, as clashes ensued with some of those gathered.

The inspectorate, an oversight agency that reviews policing and Garda practice and recommends improvements, found that internal reviews into both events had been carried out, but many recommendations arising had not been implemented.

The head of the inspectorate, Chief Inspector Mark Toland, said because any outbreak of disorder could undermine public confidence in policing, it was imperative the force had “sufficient capacity and capability” to deal with such events.

“The inspection found that existing public order policies and procedures are not always followed and this creates a significant risk that a disproportionate policing response will be employed or inappropriate tactics used,” he said.

The inspectorate found there was “limited external accountability” in relation to the use of force by gardaí despite the impact this could have on the relationship between the force and the public.

At the same time, the Garda had trained large numbers of its members in public order or riot squad policing and the inspectorate said great strides in training and preparing these members had been made in the past two years. Garda members who worked in this area were dedicated and professional.

It said public order policing suffered from basic problems, such as delays in assembling a public order unit when needed, and the model for policing it had been developed without any clear definition of “what constitutes a public order incident”.