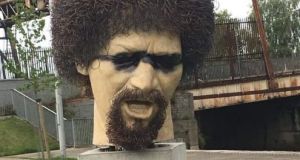 The Luke Kelly statue after being daubed with black paint.

A statue of musician Luke Kelly on Sheriff Street, Dublin, has been vandalised.

Photographs on social media show black paint across a section of the statue, which features the head of the late musician with his eyes closed and mouth open.

The statue was one of two unveiled in January in Kelly’s memory on the same day. One of the statues stands on South King Street in Dublin 2, while the other is at the junction of Guild Street and Sheriff Street.

A spokeswoman for Dublin City Council said there would be a meeting on Wednesday between the artist Vera Klute, the council, and a specialist contractor at which they would decide on the best method to remove the paint.

Hundreds of locals braved the cold conditions for the unveiling. It was Cllr Christy Burke who first proposed a statue to Kelly in 2004.

Small children should be restricted to one square of chocolate a week 19:24
Garda raids in Kerry and Laois net €4m in cash 19:20
Ireland to accept 50 more refugees from Greece following Moria fire 19:20
Woulfe not ‘sufficiently vigilant’ about position as a new Supreme Court judge, report finds 19:33
‘People need to be given hope’ in Covid-19 messaging, Dáil told 19:08