Funeral of Garda Colm Horkan to take place on Sunday

Minute’s silence to be observed at Garda Headquarters, all Garda stations nationwide 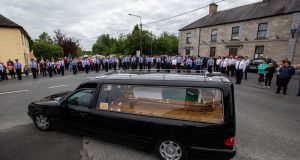 The funeral of Detective Garda Colm Horkan, will take place on Sunday in Co Mayo. The 49-year-old garda who was shot dead in Castlerea, Co Roscommon, late on Wednesday night will lie in repose at the family funeral home in Charlestown on Saturday afternoon.

Det Gda Horkin’s remains will be removed from the family home on Sunday morning to arrive at St James’s Church, Charlestown, Co Mayo for concelebrated funeral Mass at 12 noon, followed by burial in the adjoining cemetery.

Mourners will follow social distancing guidelines as per HSE guidelines.

The national flag will be flown at half-mast as a mark of respect to Det Gda Horkan. One minute’s silence will be observed at Garda Headquarters and at all Garda Stations around the country where current and past members of an Garda Síochána are invited to attend.

At each Garda station, the station party will parade in front of the station and will be brought to attention at 12 o’clock to observe a minute’s silence.

The funeral will be live-streamed at mcnmedia.tv/camera/charlestown.