Tenure noted for decisions such as not to prosecute Malcolm MacArthur, Ian Bailey 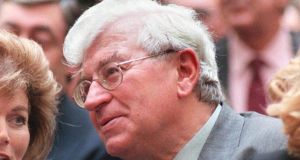 Eamonn Barnes was appointed DPP in January 1975, which position he held until his retirement in 1999. File photograph: Frank Miller/The Irish Times

Eamonn Barnes, the State’s first Director of Public Prosecutions (DPP), has died. Mr Barnes was appointed to the position in January 1975, which he held until his retirement in 1999.

“He set up this office, asserted its statutory independence, and established the highest prosecutorial standards which we still adhere to today,” she said.

Minister for Justice Charlie Flanagan said Mr Barnes had served the State with “considerable distinction in that role for 25 years, establishing the unquestioned independence of the position from government”.

Born in 1934, Mr Barnes was the son of John and Bridget Barnes, of Ballymote, Co Sligo. He was educated at Ballymote National School, and later the Franciscan College, Multyfarnham; St Nathy’s College, Ballaghaderreen; King’s Inns Dublin and University College Dublin.

Called to the bar in 1958, he joined the Attorney General’s office in 1966. The position of DPP was created following the passing of the Prosecution of Offences Act, 1974.

Counted as possibly his most controversial decision was that not to prosecute MacArthur in 1983 for the murder of Donal Dunne.

Mr Barnes was also DPP at the time of flimmaker Sophie Toscan Du Plantier’s 1996 murder in West Cork, which journalist Ian Bailey was arrested in connection with.

During an appearance in the High Court in 2015, he said he did not prosecute Mr Bailey because he did not believe there was a prima facie case. He told the court he was aware gardaí were anxious that Mr Bailey be prosecuted and there was a lot of “attempted persuasion” for this to happen.

Mr Barnes was instrumental in the foundation of the International Association of Prosecutors in 1995, serving as its president from 1996 until his retirement.

During his time as DPP, he was known for his firm position on the importance of not revealing why, in some cases, decisions were taken not to direct prosecutions.

“If reasons are given in one or more cases, they must be given in all,” he said in a statement in 1983. “ ...To announce that [some] factor was the sole reason for non-prosecution would amount to conviction without trial in the public estimation.”